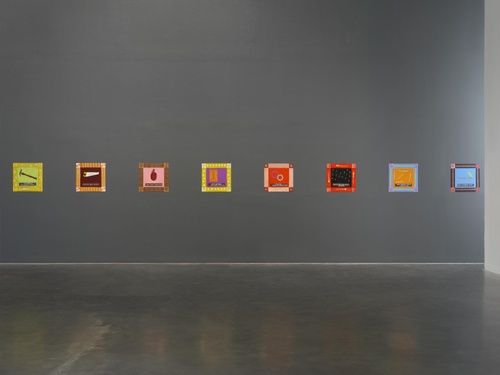 This ATLAS multimedia essay begins from the Summer 2019 New Museum exhibition “Lubaina Himid: Work from Underneath” and investigates the connections between Himid and two additional artists who were also featured in past New Museum solo exhibitions: John Akomfrah and Keith Piper. Himid, Akomfrah, and Piper’s careers are linked through the historic 1982 First National Black Art Convention in Wolverhampton, UK, but also through the way in which their artistic practice is conceived of within an expanded framework of collectivism, dismantling authoritative narrative structures, and the creation of new expanded genealogies through archival imagery, documents, and texts.

For more than three decades, pioneering British artist Lubaina Himid has been committed to interrogating the representation of black identity and experience in art and culture. Born in 1954 in Zanzibar and raised in London, Himid became a leading figure in the British Black Arts Movement in the 1980s, driving critical discourse around the contemporary and historical experience and contributions of the African diaspora. In her vivid acrylic paintings, wooden cut-out installations, and other multi-media works, Himid foregrounds the agency, fraught histories, and labor of black protagonists. In her paintings, Three Architects (2019) and Six Tailors (2019), for example, both newly produced for the solo exhibition “Work from Underneath” at the New Museum in the summer of 2019, groups of black subjects appear consumed in collaborative work—weaving new fabrics and forms for inhabiting the world. Describing these speculative scenes of shared action, Himid told curator Natalie Bell, “The work is meant to trigger that experience of collective change—of achieving something, however small, by working together. There are very few paintings of black people doing that. It’s both a reflection and a vision of an ordinary life that should be possible.” 1 The works in this exhibition both represent and beckon the labor of collective change in the face of extant structures of authority, rendering the title “Work from Underneath,” at once a descriptor and an emphatic call to action. 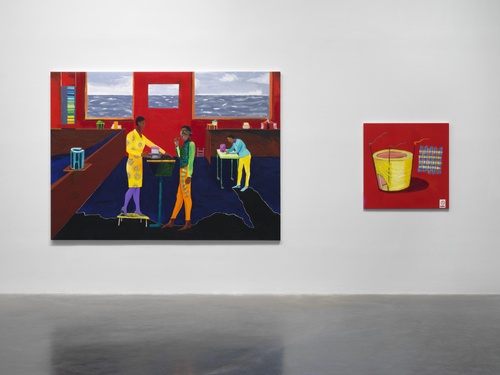 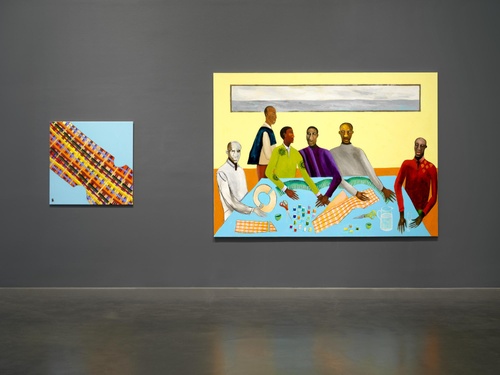 In many ways, the work and message of Himid’s exhibition at the New Museum is emblematic of her larger project as a self-described “political strategist,” using her work to provoke conversation, reflection, and change. In 1982, after receiving a degree in theater design from Wimbledon Art School and working for a number of years in set and costume design, Himid enrolled in a graduate program in Cultural History at the Royal College of Art (RCA) in London, with the desire to research contemporary black artists working in Britain. She has explained: “I knew that there were black artists out there, even though, at that stage, I didn’t know who they were. I knew I couldn’t be the only one—although people would actually say to me: Black people don’t make art.” 2 Without an established framework to build from, Himid began her research from scratch, placing advertisements in Art Monthly inviting all young black artists in Britain to share their contact information so she could send them a questionnaire about their practice. 3 Her resulting thesis, “On Being a Young Black Artist in Britain Today: A Political Response to a Personal Experience” (1984), recounts the shared sense of displacement and lack of institutional support faced by many minority artists at the time. 4
Lubaina Himid in Conversation with Curator Natalie Bell, June 29, 2019.

As part of her research, Himid attended the First National Black Art Convention in 1982, an historic gathering at the Polytechnic in Wolverhampton of artists and students who came together to “discuss the form, functioning, and future of Black Art.” 5 There she came into contact with fellow artists such as Eddie Chambers, Claudette Johnson, Keith Piper, Donald Rodney, and Marlene Smith, all members of the BLK Art Group, which organized the conference; she also connected with Rasheed Araeen, Frank Bowling, Shaka Dedi, Sonia Boyce, and members of the Black Audio Film Collective (BAFC). Here, the efficacy and meaning of the classification “Black Art” was critically debated, and a network of alliances and connections was forged. Notably, the term “Black” in this context referenced people of the African, Asian, and Caribbean diaspora. Scholar Sophie Orlando explains: “‘Black’ does not designate an ethnicity or colour, but a political place of enunciation that is common to migrants or British people who immigrated. In other words, British Black Art entails individuals who are defined by a common political space that is linked to the movements of British decolonization in Africa, Asia and the Caribbean.” 6

It was at the First National Black Art Convention conference that Himid began developing what would become significant relationships with other Black British artists—and particularly women artists—including Johnson, Smith, Boyce, and Ingrid Pollard. 7 Throughout her career, Himid has used the content of her artistic work and practice as a curator in institutional and alternative spaces to celebrate and make visible the contributions of an expanded constellation of Black women artists. She has, in her own words, strived to “fill the gaps in a history which is there in front of us but is somehow obscured or perceived as clear and complete when it is not.” 8 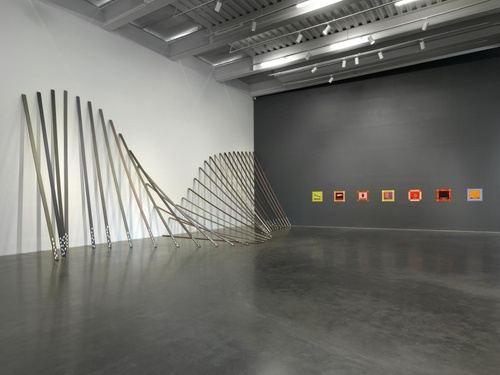 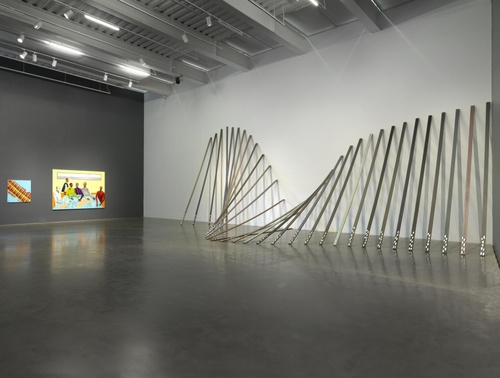 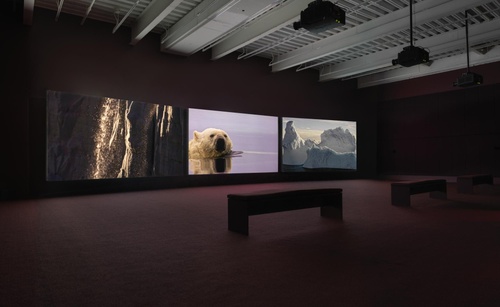 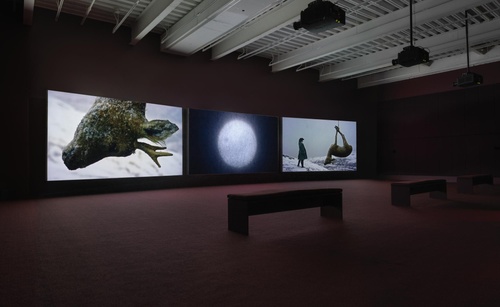 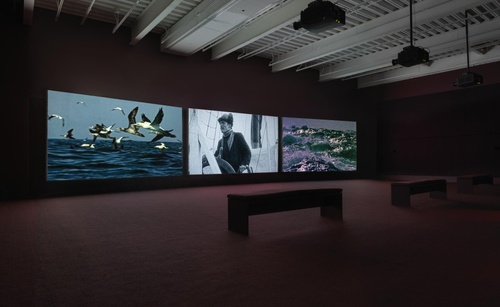 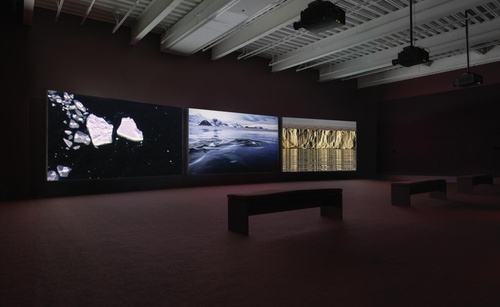 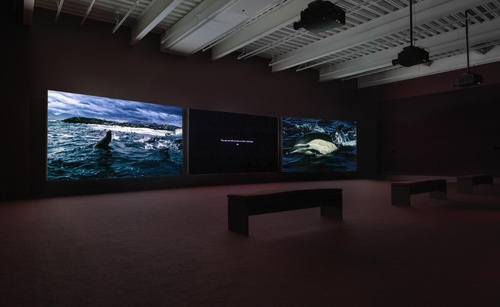 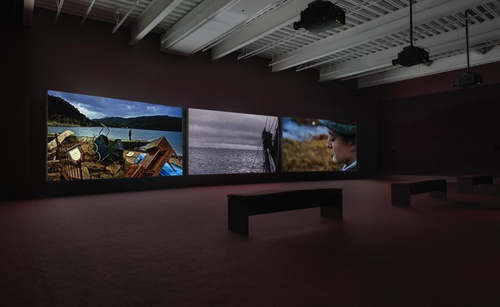 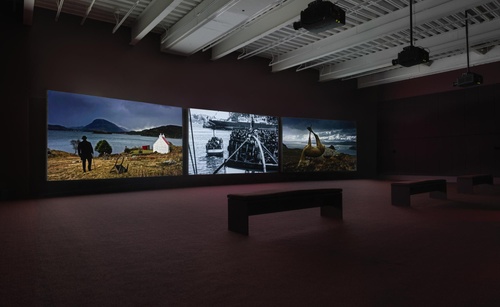 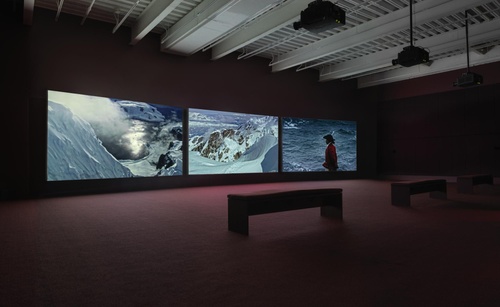 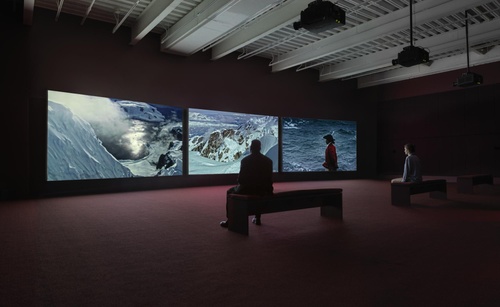 “Lubaina Himid: Work from Underneath” also marks the third solo exhibition at the New Museum featuring the work of an artist who was present at the historic First National Black Art Convention. In 2018, the New Museum staged “John Akomfrah: Signs of Empire,” the first American survey of the British artist, film director, and writer. The exhibition at the New Museum presented Akomfrah’s more recent video work, like his three-channel video installation Vertigo Sea (2015), in conversation with three earlier installations: Expeditions One: Signs of Empire (1983), the first work produced by the Black Audio Film Collective, The Unfinished Conversation (2012), and Transfigured Night (2013).

Akomfrah’s work with the Black Audio Film Collective demonstrates a set of impulses similar to those that guided Himid’s notion of what it meant (and means) to be an artist invested in overlooked histories. The work of Akomfrah and the BAFC was deeply rooted in the archive, using primary sources across all forms of media, including still photography, film, text, and audio as a way to “grapple with the present.” 9 Key to their collective research practices was not only the unearthing of these archival materials but also the interrogation of the usual spaces of “accepted knowledge sources.” BAFC would eventually amass a collection of “slide-tape texts,” asking how authority was created, symbolized, and carried through various periods of British colonial and postcolonial history. 10 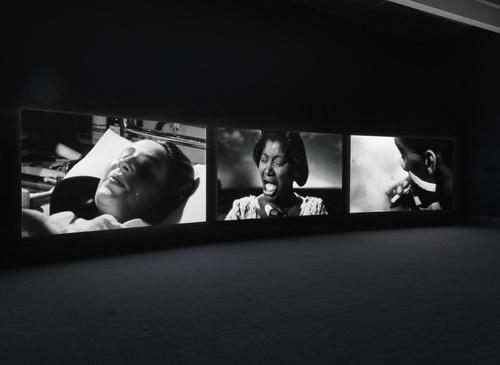 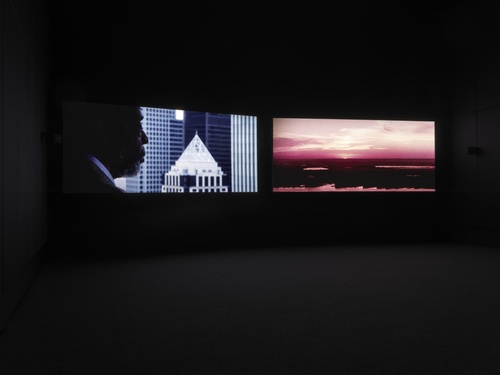 While the slide-tape libraries, which became a core important component of Akomfrah’s work with the BAFC, were in part a result of the economic reality of being unable to afford the much more expensive 35mm film, they also emerged from an interest in the preservation of disparately sourced images—cheap paperbacks, back issues of National Geographic, or outdated elementary school textbooks, etc—which also involved a re-inscribing of cinematic techniques. Each image, as it was turned into a slide with the collective’s rostrum camera, could be zoomed into, panned over, or faded into or out of: creating their own filmic relationships, narratives, and layers of motion within and through archival history. 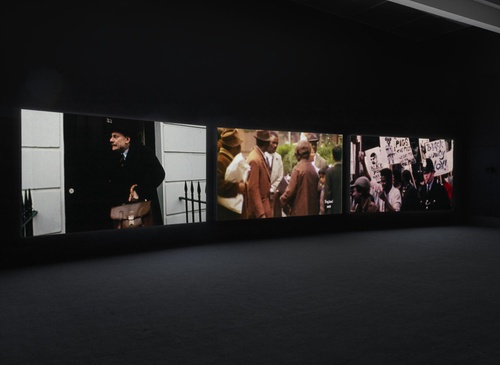 As Tina Campt writes in the exhibition catalogue, the particular quality of the still image being compelled to move through the rostrum cameras of Akomfrah and the BAFC centers the idea of “black visuality as flow.” This, she writes, is a radical alternative to the “objective” authority of the archive. Instead: “the black and brown bodies that shuttle between its screens are imaged in ways that subtly detail their transformation as they flow through waves of displacement and dispossession, struggles with racialized violence and the vicissitudes of postcolonial becoming. These forces change them, but cannot deform them; they are gradually but permanently re-formed.” 11
Collective Imaginings: Legacies of the Black Audio Film Collective, New Museum, New York, July 12, 2018.

In 1999, the exhibition “Keith Piper: Relocating the Remains” traveled to the New Museum from the Institute of International Visual Arts, London, showcasing the multi-media work of the influential BLK Art Group member. In the exhibitions and catalogues for both shows, explicit reference is made to the artists’ early collaborative work and the other groups they were in dialogue with—underscoring a concern for historicizing artists within these larger frameworks and the importance of network building in the British Black Art Movement.

As with Himid’s research and Akomfrah’s involvement with the BAFC, Piper and the BLK Art Group were also invested in practices that opened up questions of so-called “authoritative” histories, and how those narratives were being continually written into the present. In the New Museum exhibition, an environmental installation of Piper’s entitled Unrecorded Histories (1999) formed a kind of central thesis for the collective and open-ended work that Piper and the BLK Art Group hoped these kinds of projects could accomplish. 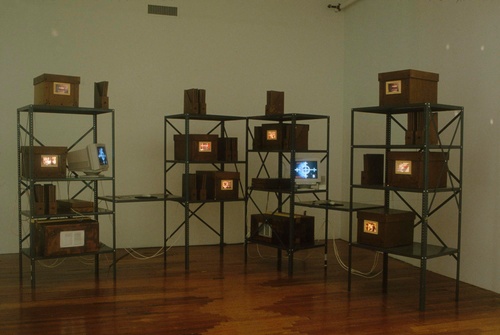 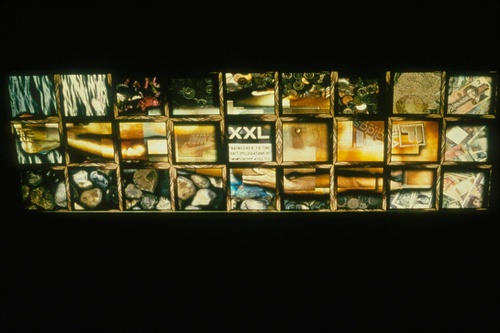 Unrecorded Histories combined older visual cues of authority and institutional research—an old-fashioned desk, an antique carpet—with newer technologies of information collection, organization, and dissemination—a desktop computer running a program of various clips of Piper’s older video works. Visitors were invited to sit at the desk to select and arrange their own combinations of these clips, which would then be projected on the darkened wall in front of them in the order selected.

The fragments available for visitor interaction resulted from Piper’s A Ship Called Jesus (1991), Trade Winds (1992), and Go West Young Man (1987), older video installations that all in one way or another dealt with histories of the transatlantic slave trade and the violent origins of the African diaspora. Similar to Akomfrah and the Black Audio Film Collective, a key component of this work is the practice of creating new constellations of relationships from preexisting material. Yet in Piper’s installation, the onus of this work fell seemingly on the viewer-participant rather than the artist(s). In sitting down at the desk, the work required the visitor to physically enact the processes of creating a narrative from the archive, perhaps also asking them to consider where else in their lives they had (or did not have) these privileges of authority. 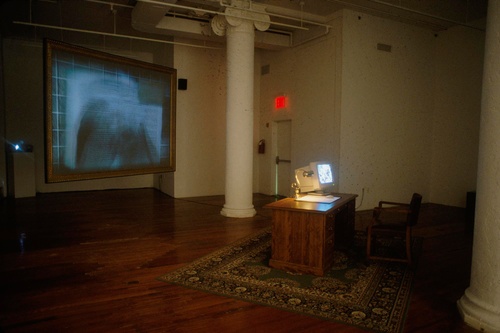 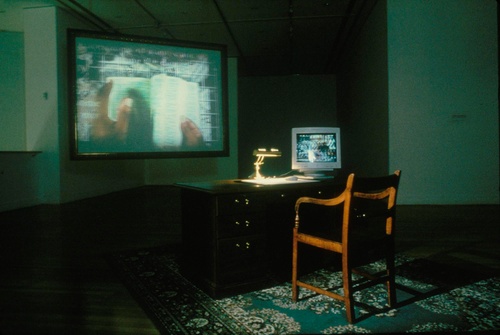 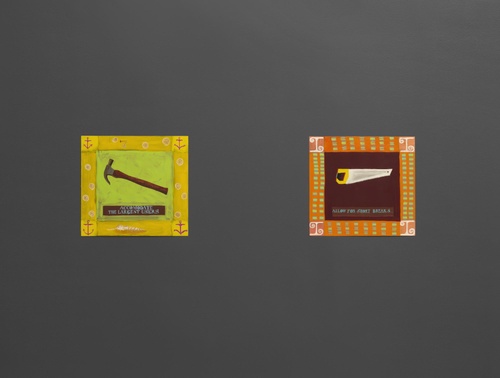 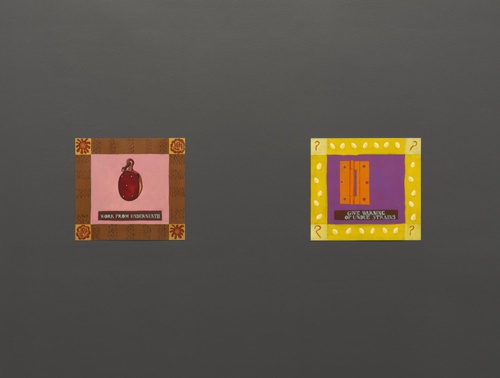 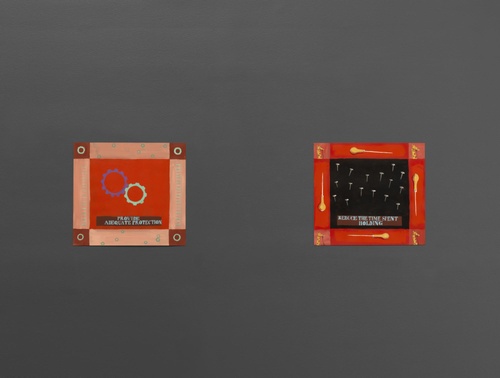 Lubaina Himid’s exhibition at the New Museum marks a continuation of featuring artists who critically fashion new genealogies, histories, communities, and alliances, while also pointing to a history of exhibiting artists who were involved with crucial Black artist groups in the United Kingdom throughout the 1980s and 1990s. Concerned in the content and practice of her work as an artist and curator with forging change through collective action, Himid’s exhibition at the New Museum is fittingly rife with painted tools, hardware, and scenes of shared making. These newest paintings, which pair the brightly depicted hardware with the language of manuals and instructional tomes, also speak to the seemingly innocuous origins of authoritative voice in our lives. By pulling out and isolating snippets of text like “WORK FROM UNDERNEATH,” “ACCOMMODATE THE LARGEST USERS,” “PROVIDE ADEQUATE PROTECTION,” and “ENSURE SUFFICIENT SPACE,” these directives about controlling the conditions of labor can also be recast as softer entreaties to care. This transformational potential—like the archival reclaiming of the Black Audio Film Collective or the participatory invitations of Keith Piper—highlights what it means when we allow source material (photographs, video, text, etc) to live and breathe outside prescriptive, assumed, and hierarchical authority.