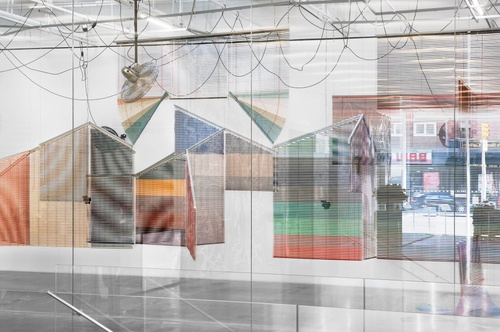 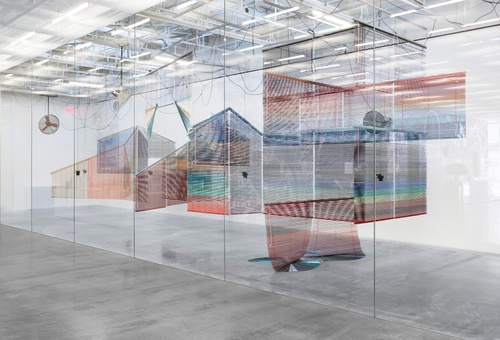 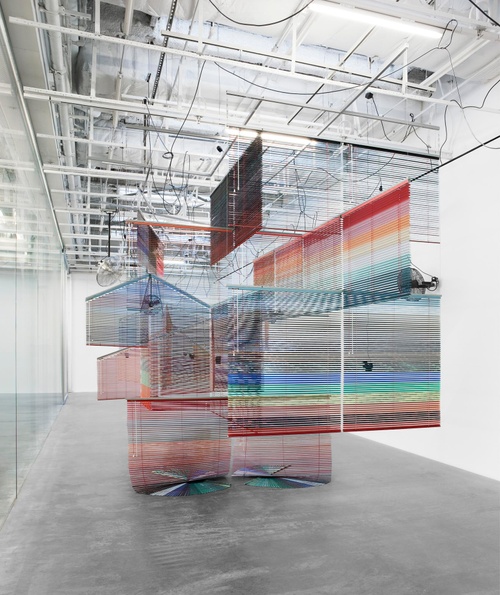 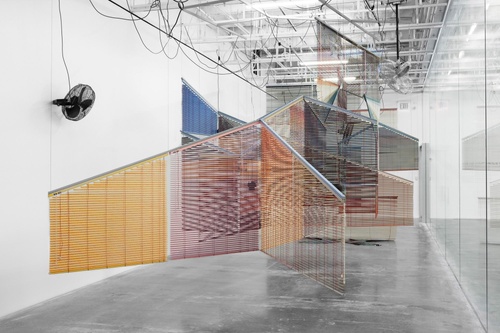 Exhibitions
Voice and Wind: Haegue Yang
Haegue Yang’s work is marked by a particular preoccupation with the coexistence of formalism and emotion, determination and improvisation. Yang often employs commercially manufactured venetian blinds in her meditative installations, architectural interventions, and sculpture as a kind of imperfect spatial boundary—a disruption of sight lines and movement that is easily transgressable visually, aurally, and physically. In these works, electricity operates as an invisible connection between objects, people, and ideas; it is the source of artificial approximations of sensual experiences such as heat, light, and humidity that conjure other places, other people, comfort, distress, the familiar, or perhaps something profoundly forgotten.

The main work in this exhibition, Series of Vulnerable Arrangements—Voice and Wind (2009), evokes shadows of places and experiences not physically present. Electric fans and scent atomizers function as sensorial stimuli infusing the installation with subtle tactile and olfactory experiences that call upon the visitor’s subjectivity as a key element in the meaning of the work. The labyrinthine system of suspended venetian blinds reflects a custom selection of uncategorizable colors and patterns that according to the artist, “exist at the edge of taste.” Avoiding rigid concepts of design or periodization, these functional decorations for the home emphasize the non-aesthetics of the private sphere, where “the self is cared for and contemplated, and can be shared in a different way,” says Yang. Series of Vulnerable Arrangements—Voice and Wind relies on natural light and invokes the modest, mundane, non-public influence of the domestic space, a recurring concept in Yang’s works.

Accompanying this work, and available at the Visitor Services Desk in the lobby, is the narrative track from Doubles and Halves—Events with Nameless Neighbors, a non-synched video and sound installation in which Yang juxtaposes video “landscapes” of her neighborhood of Ahyun-dong in Seoul and the Giardini of the Venice Biennale in the off-season with audio “portraits” of the anonymous, nameless people who inhabit those spaces. As the work states: People who live here are young. Their youth is explained by their uselessness. Because they are young, they move swiftly. This is different from being in a hurry, because they are not in a hurry to be on a fast track. Their agility is also explained by their uselessness… Through these observations, Doubles and Halves—Events with Nameless Neighbors provides a narrative voice to the experience of Series of Vulnerable Arrangements—Voice and Wind and asks us to consider the anonymous beings wandering through the landscape of the sculpture, the Museum, the Bowery, and the city.

“Voice and Wind: Haegue Yang” is curated by Eungie Joo, Keith Haring Director and Curator of Education and Public Programs. Series of Vulnerable Arrangements—Voice and Wind and Doubles and Halves—Events with Nameless Neighbors were originally commissioned by the Korean Pavilion at the 53rd Venice Biennale, organized by Eungie Joo for The Arts Council Korea. 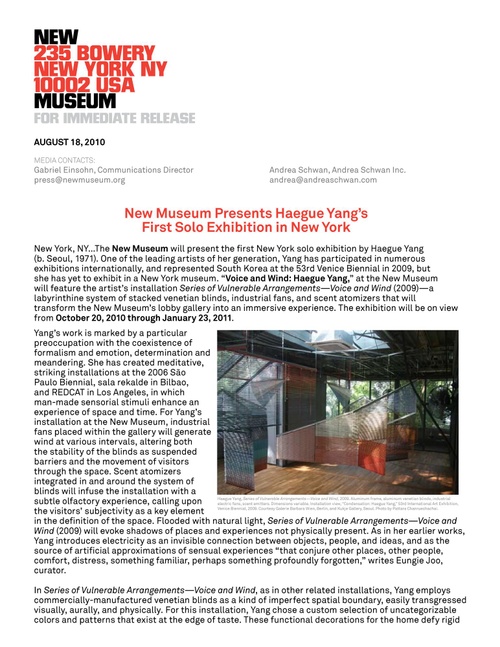