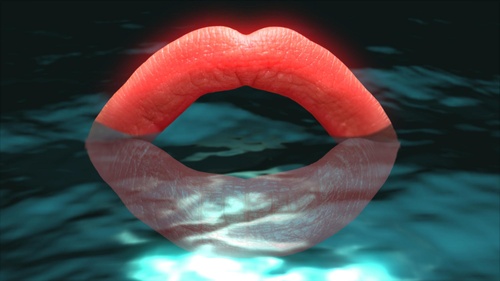 Exhibitions
Screens Series: Agniezka Polska
“Screens Series: Agnieszka Polska” inaugurates the New Museum’s Screens Series, a platform for the presentation of new video works by emerging contemporary artists. Working primarily with digital animation, collage, and computer-generated imagery (CGI), Agnieszka Polska creates dreamlike films that explore the ways that language and visual iconography manifest themselves within contemporary consciousness. The ideas for many of the Polska’s works derive from her own scripts and poems, as the discovery of connections between words, and the surreal aspects of meaning that arise from their juxtaposition, commonly form the foundation of her films.

I Am the Mouth II (2014) features a pair of disembodied lips that is half-submerged in water and whispers seductively about the mechanisms by which words, in the form of sound waves, make their way through various materials including the viewer’s own body. The steady tone of the voice emanating from the lips hypnotizes the listener, revealing the subliminal influence artists have on their audiences. In Watery Rhymes (2014), individual words and short phrases float within a colorful, seemingly toxic liquid and behave according to the laws of quantum physics—constantly moving and overlapping one another, their meanings becoming increasingly indefinable as their forms dissolve.
Polska’s recent animations Guns (2014), The Leisure Time of Firearm (2015), and My Little Planet (2016) similarly present slow-paced, contemplative images that engage viewers directly and manipulate their senses through visuals and sounds. Seen together, this selection of videos highlights the ways in which her works investigate the intimate relationship between on-screen images and the physical and psychological response of the viewer—a relationship that has become increasingly direct in recent years due to the proliferation of electronic devices and the ubiquitous dissemination of visual and verbal information in our surroundings.

Polska’s videos will be screened in the New Museum Theater on Wednesdays from June 29 through August 3 in the following order: I Am the Mouth II, Watery Rhymes, Guns, The Leisure Time of Firearm, and My Little Planet.