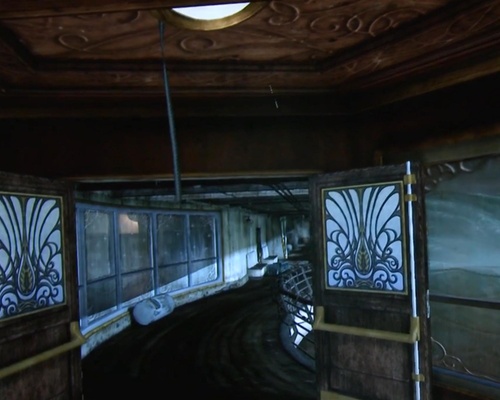 An essay film in the tradition of experimental documentarians like Chris Marker or Harun Farocki, Remember Carthage takes the viewer on an epic journey in search of an abandoned resort town deep in the Sahara desert. However, one travels not through archival or personal images but through footage sourced from PS3 video games and Second Life, depicting ancient civilizations that seem at once familiar and totally fantastical. Presented in conjunction with the exhibition “Museum as Hub: Walking Drifting Dragging,” which centers on artist expeditions, Remember Carthage is a first-person journey through a historical fantasia that highlights the fictionalizing and exoticization of culture within gaming and virtual worlds.

The voyage begins on the swaying deck of a ship in unnamed waters and proceeds through a myriad of different landscapes, from arid deserts to the gaudy interiors of what appear to be Persian palaces, to barrooms and bedrooms—each new scene unfolding in sync with the narrator’s melancholic remembrances. As in other works by Rafman, a feeling of alienation and loneliness structures the story, with the narrator searching for a connection and yet unable to grasp what is real or stable around him. In Remember Carthage, the filmmaker emphasizes how digital media makes history seem both totally accessible through archival information and, at the same, completely foreign to us. Here, the narrator’s search for the abandoned town is rendered increasingly futile as he traverses a landscape where markers of time and place often appear to be unmoored, floating signs. And, as his journey continues, he becomes unable to distinguish authentic sites from simulated versions.

The repetitive and circular sequencing of the film, with recurring locations and characters, furthers the protagonist’s sense of dislocation and interpolates the logic of gameplay—continual death and resurrection—into his journey. It is unclear whether the narrator in Remember Carthage ever arrives; despite constantly moving, he is caught in a horizontal, virtual dream world where his goals become ever more distant. Jon Rafman is an artist, filmmaker, and essayist whose work explores the impact of technology on consciousness. His films and artwork have gained international attention and have been exhibited at the New Museum, the Palais de Tokyo in Paris, and the Saatchi Gallery in London. Rafman’s work has been featured in Modern Painters, Frieze, the New York Times, and Harper’s.