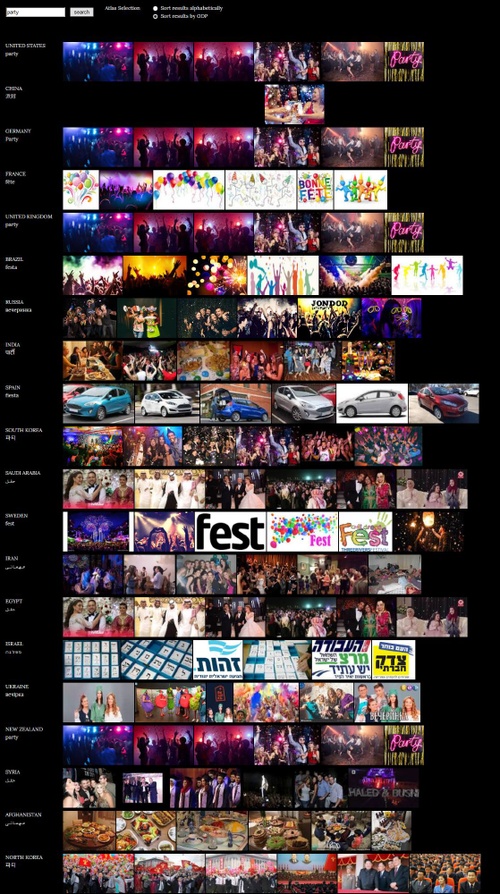 Exhibitions
Taryn Simon and Aaron Swartz: Image Atlas
In 2012, New Museum presented “Image Atlas” as part of the First Look online exhibition series in collaboration with Rhizome. Curator Lauren Cornell selected artist Taryn Simon and technologist Aaron Swartz’s Image Atlas (2012), a project initiated through Rhizome’s signature Seven on Seven Conference—a unique event that bridges the fields of art and technology around the creation of new work. Image Atlas investigates cultural differences and similarities by indexing top image results for given search terms across local search engines throughout the world. Visitors can refine or expand their comparisons from the sixty countries currently available and sort by Gross Domestic Product (GDP) or alphabetical order. For instance, entering the term “party” into the Image Atlas reveals varied associations: from winning moments in soccer games in Brazil, to black-and-white portraits of political leaders in North Korea, to flames in Kenya, to colorful streamers and confetti in the US.

Through an incredibly simple interface, Image Atlas raises profound questions related to language, international culture, and systems of information. Questions such as: What does popularity (i.e., the top result) reveal? How neutral is the statistical data that constructs the way we see ourselves and others online? Is visual language, now a more ubiquitous form of communication due to social media like Instagram, subject to the same issues of translation as the written and spoken word? And is it conceivable to imagine a global language?

An ambitious and innovative artwork, Image Atlas provides a singular method of retrieving and comparing images that illuminate the often hidden spaces between cultures. When engaging with the work, users are implicitly encouraged to locate variation—an exercise that points to the persistence of difference in a world supposedly flattened by the homogenizing effects of the global economy, both financial and cultural.