A Little About Me: Four Works by Robot (John Miller and Takuji Kogo)

A Little About Me: Four Works by Robot (John Miller and Takuji Kogo) 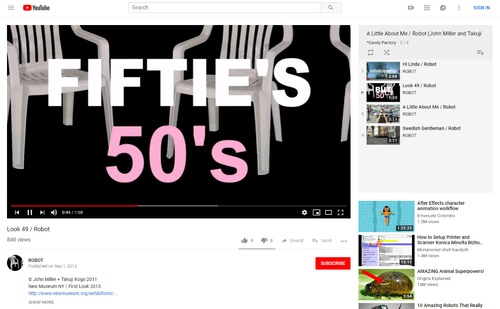 As a series, the Robot videos investigate the ways in which individuals market themselves and their romantic desires within a visual culture where raw emotions have come to hold a strong currency. In Swedish Gentleman, a doleful electronic voice sings about the search for a commodified love interest over a looped video of a quaint, small-town Scandinavian scene. In A Little About Me, a timid and whimsical love-seeker who “thrives on feelings of magic” is represented as a cut-out image of a girl layered over a panoramic pan of a parking lot. Look 49 unfolds in a boundless black environment dotted with white lawn chairs as a narrator sings of his interest in “japanese, foreign women. black also welcome,” and Hi Linda offers a rendition of a modern-day love letter in which subtlety has been replaced by TMI.1

In 2018, the site was archived by the New Museum Archives using Rhizome’s Webrecorder tool. The archived copy may be viewed via Webrecorder.io, here: https://webrecorder.io/NewMuseumArchive/first-look-a-little-about-me-four-works-by-robot-john-miller-and-takuji-kogo/