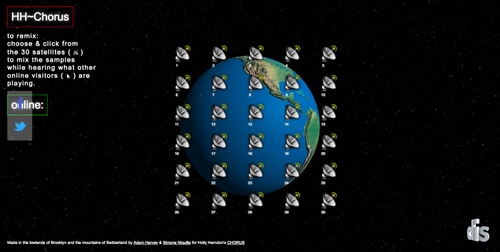 Exhibitions
Sonic Chatroulette
“Sonic Chatroulette” is a live, collaborative interface created by Adam Harvey and Simone Niquille in response to – or as a structural remix of – an earlier work by Holly Herndon: Chorus (2013).

Herndon’s live performance set involved her creating dense sound compositions while her collaborators, Akihiko Taniguchi and Mat Dryhurst, manipulate image-processing software seen projected on a large screen behind her. Herndon was interested in capturing the sounds of otherwise muted parts of her environments—be they machines, social interactions, or everyday objects – combined with a haunting and turbulent electronic score. This audio was then overlaid with a video composed of depictions of these intimate workspaces from which they originated, all seen from an aerial view as if captured by a domestic drone.

“Sonic Chatroulette” distributes the experience of Chorus across thirty constituent sounds, each tagged to an individual icon in a grid of thirty on its webpage. Chorus presented concerns about mental dissolution under workplace anxieties and networked invasion, as if these bustling work sounds were gradually wearing down coherent thought. In contrast, Chorus recasts these sound clips as sonic “building blocks”, encouraging participants to create their own new compositions, turning the components of entropy used in Chorus into components of creation and order.