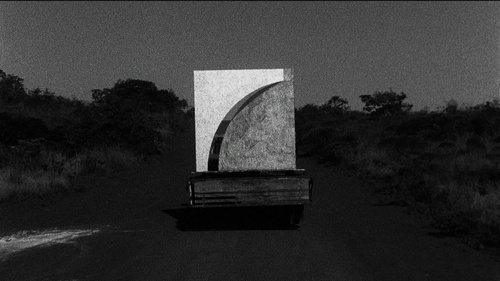 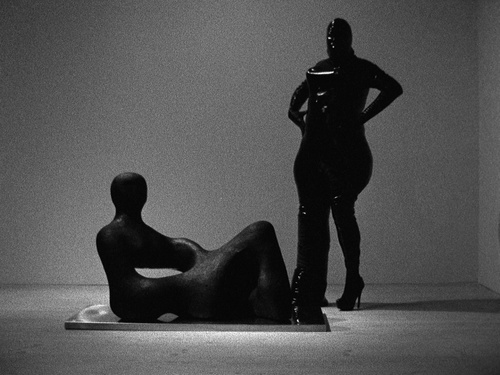 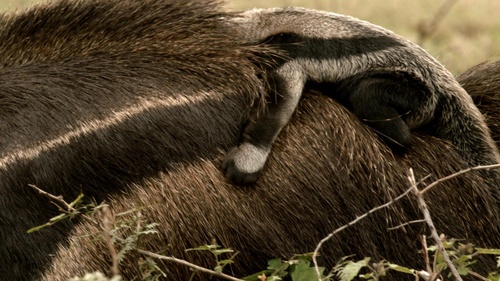 O Novo Monumento (2013) opens with a quote from a 1943 essay written collaboratively by architecture historian Sigfried Giedion, artist Fernand Léger, and architect José Luís Sert, declaring that monuments are only possible in places of unified culture and consciousness. The film then cuts to two dancers in an overgrown, vacant lot wearing ornamented jackets and moving in a choreography that suggests both the poses of voguing and ancient rituals. The film then cuts to an owl perched on a tiny branch, rippling waves in a pool, and a scarecrow near a farm. Finally, what appears to be an untitled monument by Brazilian Neoconcrete artist Amílcar de Castro emerges from a warehouse to be carted off on a flatbed truck, appearing later in the middle of a remote field surrounded by mountains. The work suggests that all of these subjects might be considered monuments—the dancers, the landscapes, the water, the stone—proposing alternative modes of commemoration and challenging traditional ideas of monumentality.

Ancestral (2016) follows a giant anteater as it moves through a jungle, its silky coat contrasting with the rough shrubbery. A native to Brazil, and a national symbol for the country, our protagonist carries a small child on its back, eating ants from the ground with its long, tubular snout and picking at the dirt with its claws. The film refuses any particular temporality, as the creature evokes those that have roamed the earth for centuries. In titling the film Ancestral, Roque aligns the animal as a familial forebear—majestic, androgynous, gentle, and sculptural.

In Zero (2019), a Shiba Inu dog wakes up to an alarm clock and finds itself alone aboard an abandoned yet luxurious private plane flying across a desert landscape. While the dog’s movements are calm, and the beige leather seats sumptuous, there is an air of impending doom as one might wonder if the dog is capable of surviving alone aboard the aircraft. As the plane glides gradually past shimmering high rises, the dog gazes longingly out the window—perhaps aware that it might be displaced, flying steadily, endlessly, as if it were the sole survivor after the end of the world.

Two additional works were screened in the theater, along with the selection of films on the screens: Modern (2014), and S (2017), which further consider themes of modernity, temporal displacement, and fluid expressions of the body. Modern (2014) stages a dialogue between English artist Henry Moore’s iconic bronze sculpture Recumbent Figure (1938) and a character outfitted in a head-to-toe black vinyl catsuit, reminiscent of another iconic figure in British culture: the underground performer and staple in the ’80s and ’90s London club scene, Leigh Bowery. The film presents a duet between the two abstract corporeal forms, highlighting their visual congruities while dismissing their clashing cultural readings and acceptances. S (2017) similarly couples abstract modernist sculpture with choreographed bodies. Footage of a spinning reflective sculpture by Brazilian sculptor Franz Weissmann is interspersed with images of androgynous characters performing geometric poses in a mechanical ballet of futurist textures, movements, and signs.

This exhibition was curated by Margot Norton, Curator. 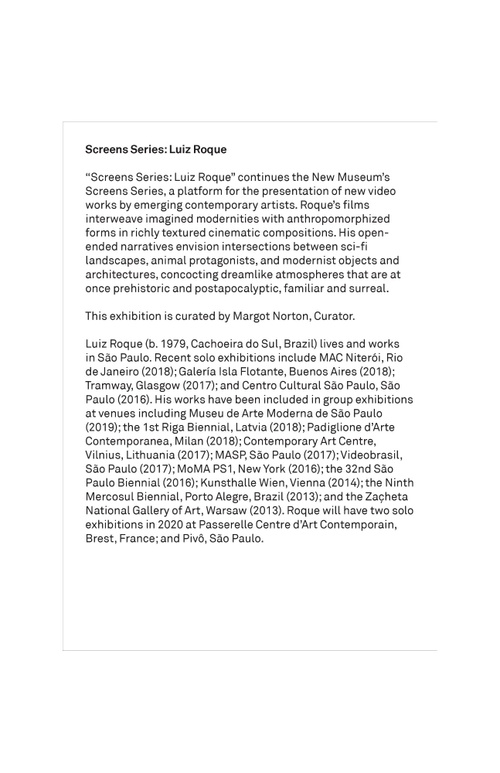