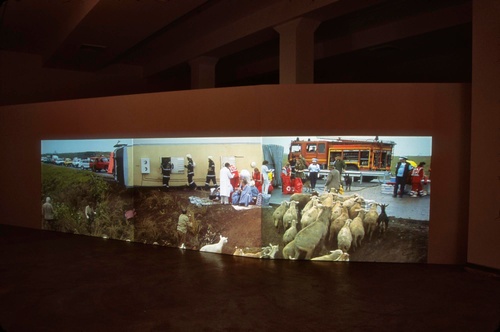 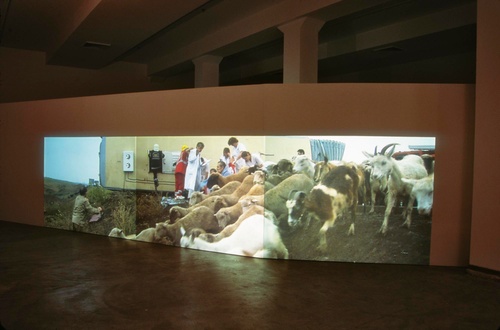 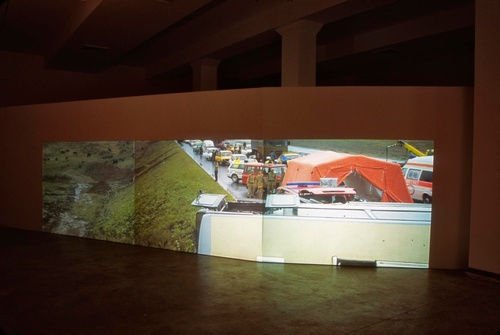 Exhibitions
Aernout Mik: Refraction
Aernout Mik: Refraction is part of the Three M Project, a series by the Hammer Museum, Los Angeles; the Museum of Contemporary Art, Chicago; and the New Museum, New York to commission, organize, and co-present new works of art. Generous support for the series has been provided by the Peter Norton Family Foundation and the American Center Foundation.

Refraction, the most recent video installation by Dutch artist Aernout Mik, is an enigmatic, occasionally cryptic portrait of the social body as it responds to a disaster. Some of the participants are actively engaged in controlling the scene, others are passive spectators, while still others are conspicuously absent - the supposed victims of this bus crash. And then there are the sheep and pigs.

Although Mik’s work emerges from a distinguished tradition of video installation, his approach is unusual in that the projection surface tends to be positioned quite aggressively within the viewing space, as an extension of the architecture itself. Entering Refraction, the first thing to strike our attention is the long, “broken” wall that serves as the projection surface for the 30-minute film. Like most everything in Refraction, the wall is an oblique reference to a kind of upheaval, an ongoing distortion whose psychological counterpart is the peculiarly detached, even robotic conduct of the characters involved in the rescue scene.

For an earlier work, Organic Escalator (2000), the surrounding walls are rigged to slowly move the projection screen closer and closer to the viewer, making it seem as if the disaster depicted within the work is steadily drawing nearer. Similarly, when Middle Men (2001) was first presented as part of the Yokohama Triennial, Mik installed it as a rear-projection kiosk inside a shopping mall, so that the resulting image - a post-stock market crash meltdown on a trading floor - might be more easily mistaken for a news broadcast or even a marketing tool.

Mik’s interest in scenes of disaster is not about envisioning violence. This may be why, despite the relative sophistication of his video productions, he does not go to great lengths to convince us that what is happening onscreen is actually real. In fact, part of the anxiety that Mik’s work provokes comes from the continuous disconnect, which never gets resolved, between each individual’s thoughts and actions and his or her way of behaving within a larger group.

In Middle Men, no one makes any attempt to interact with his neighbor: a few keep on working, but most sit and stare blankly into space, with only an occasional involuntary spasm or twitch of the body to suggest that the cataclysm has penetrated the human nervous system itself. Likewise, in the multiple-projection work Reversal Room (2001), which explores in elaborate detail and from several angles a physical attack on a waiter in a Chinese restaurant, everyone in the immediate vicinity behaves as if nothing at all were taking place. They eat their meals and continue their conversations, oblivious to the apparent force with which the waiter restrains his attacker by hurling him onto a nearby table.

During the course of Refraction, a strange ennui hangs over each individual, from emergency personnel to stranded motorists, and this disaffection begins to dominate whatever action there is. Nobody speaks or interacts meaningfully with anyone else, no overt displays of emotion take place, and even the most tightly interwoven group movements unfold numbly, in a strange buffer zone of interpersonal distance.

Mik reveals to us that, as a society, we have become so deeply accustomed to social barriers that we no longer know how to participate in activities and events that are not staged for us. This is not to argue that respecting civil authority in emergency situations is a bad thing, or that personally trying to assume control over an unmanageable crisis is a good thing. But for Mik, these depictions of faux crisis, which contain just enough reality to hold our attention, are intended to point out the increasingly universal experience of indifference toward one’s fellow human beings. Not only are we pulling apart from one another - despite the mechanisms of globalization - but our failure to stay connected results in a lessening of each individual’s own capacity for self-preservation. For without the ability (and empathy) to recognize that one’s neighbors’ lives (and those of far-distant strangers) are as valuable to them as ours are to us, human life in general starts to seem like an abstraction. In our desire to wake up Mik’s characters and snap them into fully recognizing their place in the world lie the seeds of our own confusion about how much we want to get involved, how to break out of our shells, and how to behave as if our neighbor’s fate is inseparable from our own. 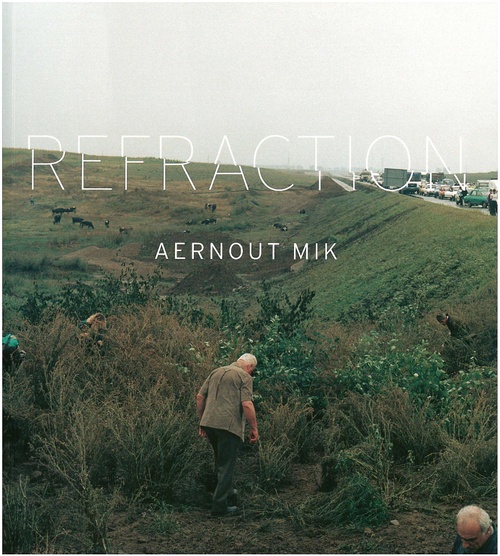