Museum as Hub: Tlatelolco and the localized negotiation of future imaginaries

Museum as Hub: Tlatelolco and the localized negotiation of future imaginaries

Exhibitions
Museum as Hub: Tlatelolco and the localized negotiation of future imaginaries
This project organized by Museo Tamayo Arte Contemporáneo for the Museum as Hub addresses the topic of neighborhood from the unique perspective of our Mexico City partner organization. For Museo Tamayo curators Tobias Ostrander and Jorge Murguía, the neighborhood or barrio is a multifaceted, fluctuating structure that contains within it not only a particular identification with a site, but also with a set of human relationships, ideals, and visions about what a particular space is and can possibly become. This collective identification can be understood to represent shared desire or desires, and as such the projection of a future imaginary or potentiality. Filled with the aspirations and anxieties of cultural development, Tlatelolco has been a significant cultural site since the Aztec period. In the twentieth century, it was closely identified with the modernist urban planning ambitions of Mexico in the early 1960s, and student demonstrations and killings during the 1968 Olympics. As a result of the 1985 earthquake, Tlatelolco suffered dramatic casualties and fatalities, as its architecture proved unsound. A site rich in the complex layering of constructed histories that define contemporary Mexico, Tlatelolco represents the construction of future possibilities for the nation as it looks to define its place within an increasingly globalized world.
In this project, Tatiana Bilbao, Christoph Draeger, Thomas Glassford, Terence Gower, Paulina Lasa, Mark Powell, and Pedro Reyes present new and existing works that address Tlatelolco as a repeated site of imaginings of the future and various collective ideals and relationships. Film screenings, artist talks and workshops, discussions with cultural critics, and informal discussion groups will take place over the course of the presentation. Discussions between artist Terence Gower and curator/writer Ana Elena Mallet, artist Pedro Reyes and architect Jose Castillo, artist Paulina Lasa and art historian/curator Cuauhtémoc Medina, and a screening of Fernando Eimbcke'sTemporada de patos will take place in the New Museum theater.

Museum as Hub: A Neighborhood Within a Megalopolis 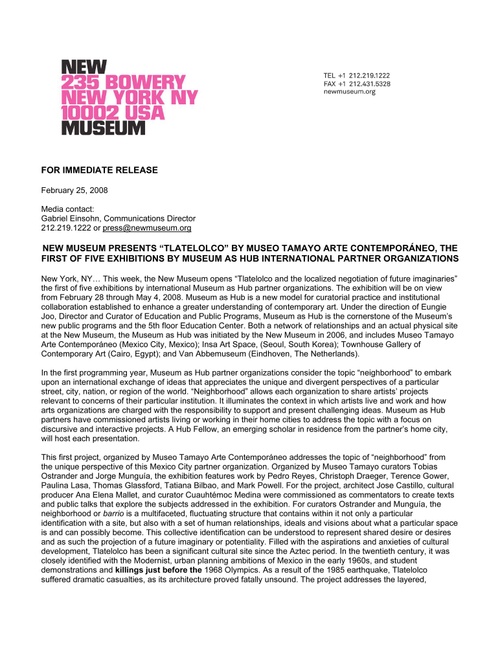