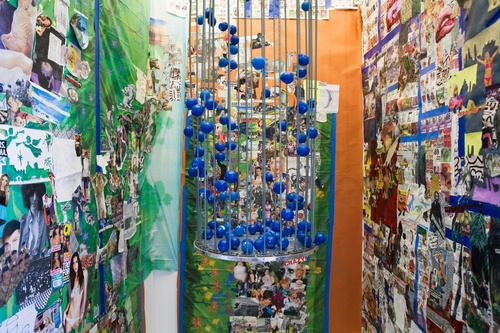 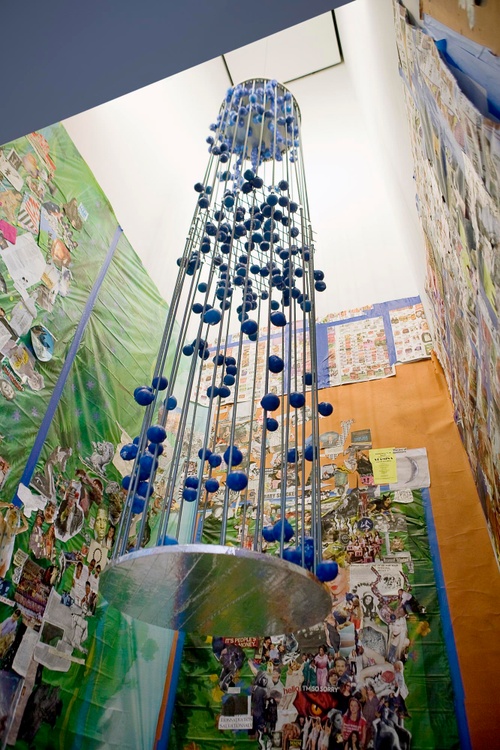 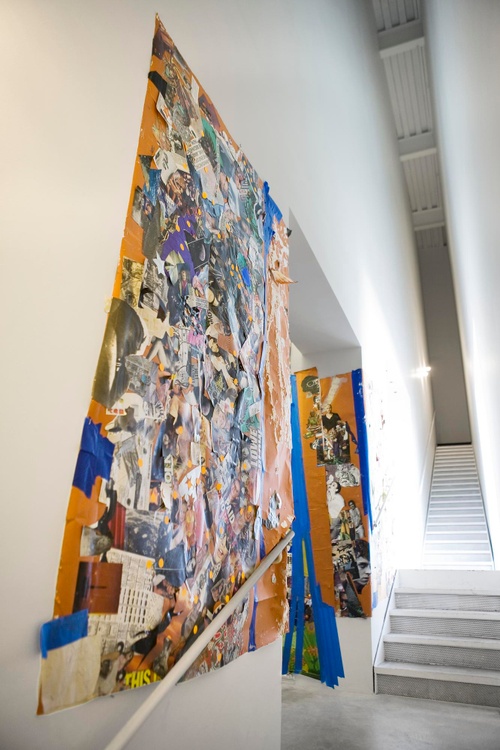 Exhibitions
Agathe Snow: Master Bait Me
Commissioned expressly for the New Museum, Agathe Snow’s installation of magnetized rubber handballs rises in a single floating column, held together by magnetic force, jail-like bars, and a little magic. Surrounded by images the artist has obsessively collected from newspapers, magazines, and advertisements, the column teeters between classical solidity and contemporary chaos. The handballs, transformed with glue and paint, conjure the artist’s teenage years spent on the streets and playgrounds of the Lower East Side, or disassembled molecular structures attempting to reincarnate themselves as some as-of-yet-unknown strand of DNA. The caged column of balls is encircled by a warren of debased popular images: celebutantes and otherwise infamous tabloid denizens gallivant about the base of this peculiar pillar, their placement nodding towards the culture from which this relic hails, a culture that is both past and present.

Snow has a background engaging in large-scale, ad-hoc communal public performances ranging from twenty-four-hour dance marathons to guerilla dinner parties. In these works as well as in her sculpture, Snow engages in building communities by creating spaces in which people may eat and dance, or play and look. For Snow it is in the broken shadow of her column, in its cracks and fissures that a new Renaissance—spiritual, political, and artistic—might sprout forth. Snow asserts that the love powering this contemporary rebirth will not be one of total knowledge advocated during the historical Renaissance, but instead a love that acknowledges our inability to know completely. In Snow’s vision, this new communal awakening will be one that willfully contradicts the tenets of empirical rationalism and instead be based in a reverence for those things outside the possibilities of human understanding: of myths, fables, clairvoyance, and the supernatural. It is these ambiguous and amorphous ideals and notions to which Snow has built her neoclassical pillar of the twenty-first century.

Master Bait Me is organized by Benjamin Godsill, Curatorial Associate.