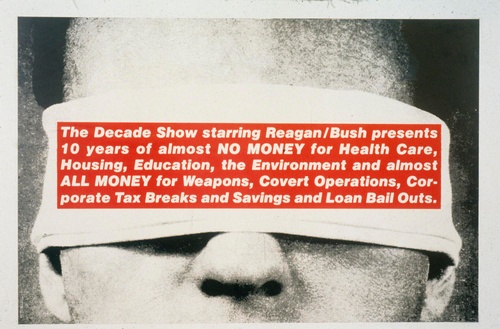 Barbara Kruger was born in Newark, New Jersey, in 1945. After attending Syracuse University, the School of Visual Arts, and studying art and design with Diane Arbus at Parson’s School of Design in New York, Kruger obtained a design job at Condé Nast Publications. Working for Mademoiselle Magazine, she was quickly promoted to head designer. Later, she worked as a graphic designer, art director, and picture editor in the art departments at House and Garden, Aperture, and other publications. This background in design is evident in the work for which she is now internationally renowned. She layers found photographs from existing sources with pithy and aggressive text that involves the viewer in the struggle for power and control that her captions speak to. In their trademark black letters against a slash of red background, some of her instantly recognizable slogans read “I shop therefore I am,” and “Your body is a battleground.“ Much of her text questions the viewer about feminism, classicism, consumerism, and individual autonomy and desire, although her black-and-white images are culled from the mainstream magazines that sell the very ideas she is disputing. As well as appearing in museums and galleries worldwide, Kruger’s work has appeared on billboards, buscards, posters, a public park, a train station platform in Strasbourg, France, and in other public commissions. She has taught at the California Institute of Art, The School of the Art Institute of Chicago, and the University of California, Berkeley. She lives in New York and Los Angeles. (taken from Kruger’s web site–August 2011)

The Decade Show: Frameworks of Identity in the 1980s 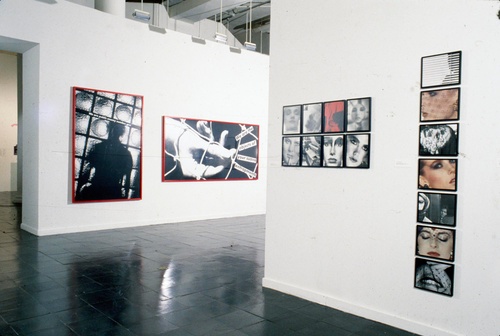 Difference: On Representation and Sexuality