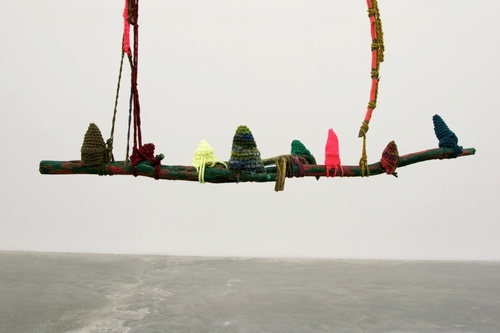 Alexandra Bircken’s sculptures and installations consist of knitted together bits of wood, branches, stone, metal, dried plants, and leather. The objects come in many forms: cuddly wool-covered stubs and rocketlike shapes, webs that have caught detritus and treasures alike, and weighty buds and flowers that dangle on the end of a potted stem. Bircken’s involvement with the preciousness and abjection of fashion and flower arrangement synthesizes a homely, therapeutic, arts-and-crafts aesthetic to create amuletlike objects that border on the spiritual, if not the occult.