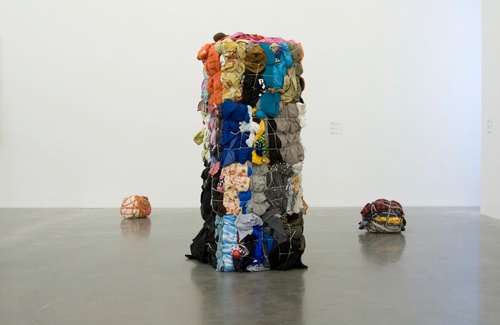 Born 1972, Baltimore, Maryland/Lives and works in Brooklyn, New York Drawing from cast-off materials that litter the urban landscape, Shinique Smith’s sculptures compress the lives of the objects she ties together “” clothing, textiles, shoes and stuffed toys; with twine, ribbon and the like. Her sensibility is influenced by abstract expressionism, graffiti and Japanese calligraphy. From Smith’s Bale Variants to Bundles that range in scale from human-sized towers to more petite and portable assemblages, Smith’s works refer specifically to the inequities of a global economy in which thrown-away clothing from the First World is shipped in bales to the Third. Her larger Bale Variants memorialize what is lost along the way. Her more recent projects have shifted towards immersive installations that reflect on the economies of excess and need. Smith earned an MFA and a BFA at the Maryland Institute College of Art, Baltimore, and she earned her Masters of Arts in teaching. She studied at the Skowhegan School of Painting and Sculpture and has participated in residencies at the Aljira Center for Contemporary Art, Newark, New Jersey (2005); Henry Street Settlement, New York (2004-2005); the Lower Manhattan Cultural Council (2003); and the Vermont Studio Center, Johnson, Vermont (2002). Solo exhibitions include Franklin Art Works, Minneapolis (2007); No Dust, No Stain Cuchifritos Gallery, New York (2006); OverStock The Proposition, New York (2005-2006); and FULL ON! Boulder Museum of Contemporary Art, Colorado (2005). Smith’s artwork has been included in numerous group exhibitions including Future Nomad Vox Populi Gallery, Philadelphia (2007); I Feel You Roebling Hall, Brooklyn (2006); Do You Think I’m Disco Longwood Arts Gallery, Bronx (2006); and Frequency and African Queen Studio Museum in Harlem, New York (2005). 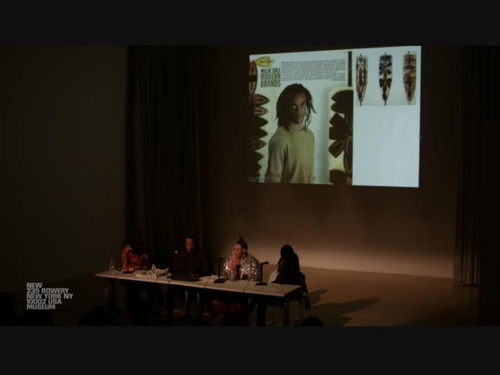