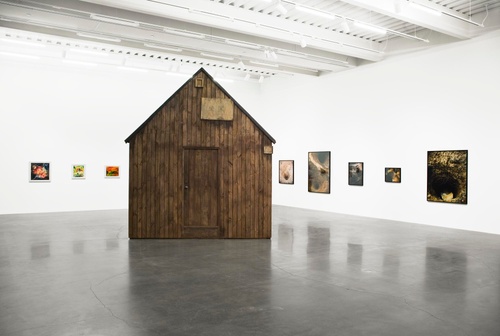 Eugene Von Bruenchenhein was born in Marinette, Wisconsin, in 1910, a year when Halley’s Comet came back into the near Solar System. His mother died when he was seven. His father, a sign painter, married again to a woman who not only wrote treatises on evolution and reincarnation, but also painted on canvas. He married Eveline Kalke (who called herself Marie) in 1943, and a year later went to work in a commercial bakery. He stayed with the bakery until it went out of business in 1959, and then spent the rest of his life in semi-retirement. Shortly after his death in 1983, thousands of drawings and paintings were discovered in his home, along with odd floral ceramic pieces, miniature furniture and towers made from gilded chicken bones, large cement sculptures, dozens of poems and written works, and hundreds of photographs of his wife Marie in exotic costumes and settings. She and his close family had kept his immense output a secret for decades. Although his early works were more traditional depictions of flowers and landscapes, among them was found a vast series of apocalyptic finger paintings, begun in 1954 in reaction to the development of the hydrogen bomb. Later works reveal interests in evolution and the origins of life, outer space, and futuristic cities. The works of Eugene Von Bruenchenhein are represented in numerous museum collections, including: American Folk Art Museum, New York; High Museum of Art, Atlanta; Museum of Fine Arts, Houston; John M. Kohler Arts Center, Sheboygan, Wisconsin; Milwaukee Art Museum; New Orleans Museum of Art; Newark Museum of Art; Philadelphia Museum of Art; and Smithsonian American Art Museum, Washington, D.C. 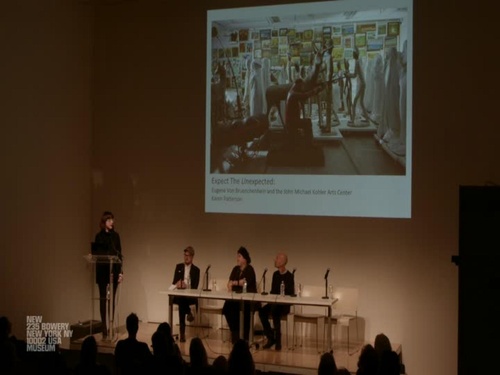 From Obscurity to Prominence: The Discovery and Stewardship of Outsider Art