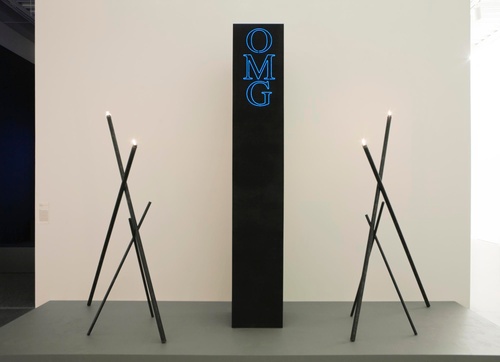 AIDS-3D is a Berlin-based collective whose work touches on both technological utopianism and digital kitsch. Their installations, performances, and Internet-based work use these themes to flippantly engage with the unmet promises of the twentieth century: religious enlightenment, sexual liberation, artistic freedom, and human progress through technological advancement. Their work OMG Obelisk (2007) exudes a sense of metaphysical doom, although cloaked in a skittish and very contemporary jokiness. A stern, almost primitive geometric structure that recalls John McCracken’s monolithic sculptures as well as Stanley Kubrick’s iconic black slab from 2001: A Space Odyssey, is juxtaposed with a ubiquitous staple of Internet jargon. OMG (an acronym for “Oh My God”) blazes atop the sculpture like a Times Square advertisement, but one with a message that is much more apocalyptic.