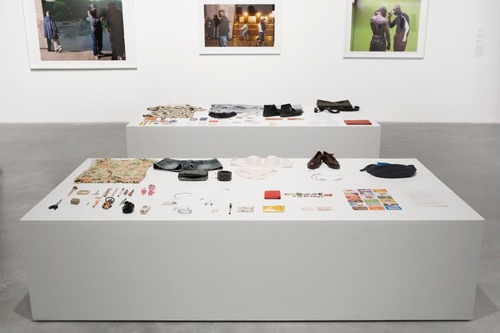 Mohamed Bourouissa photographs from his series Périphériqueare concerned with the dynamics of alliances, conflicts, and anomie in the ghetto-like Parisian suburbs known as les banlieues. Home to large numbers of often impoverished immigrants; many from Bourouissa’s native Algeria, les banlieueshave served as the nexus for volatile debates surrounding the acceptance of immigrant communities in France. This has been particularly true since the violent clashes that erupted between the French police force and scores of young inhabitants of Clichy-sous-Bois in October of 2005, which began in response to the deaths of two teenagers who were allegedly being chased by the police. Though they superficially resemble reportage, Bourouissa’s photographs are actually staged to create tableaus that are at once iconic and casual. Using this labor-intensive manner of composition, Bourouissa is able to conjure scenes that are evocative of the environs he depicts “scenes marked by a dramatic tension that sits precariously on the edge of possibility” but also have the authority of grand history paintings.