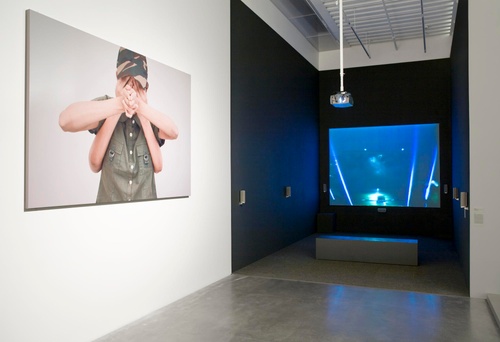 Shilpa Gupta’s work addresses pressing issues pertaining to cultural, religious, and gender discrimination, government repression, and human rights abuses, using a variety of performative strategies and a range of different mediums. In the past, she has posed as a vendor selling human kidneys in order to draw attention to human organ trafficking in India, and peddled bottles of fake blood emblazoned with confrontational statements (“I blame you for what you cannot control: your religion, your nationality”) in response to the 2002 Gujarat riots and the continued violence against the Muslim population of Kashmir. For her series of photographs Untitled (2006) Gupta transforms the childishly pious adage “see no evil, hear no evil, speak no evil” into something much more sinister. Her young subjects, hands to their faces, submit to the embrace of anonymous hands that cover their mouths, eyes, or ears, seeming simultaneously to be withdrawing from some unnamed horror, and forced to comply with the whims of an unseen authority.