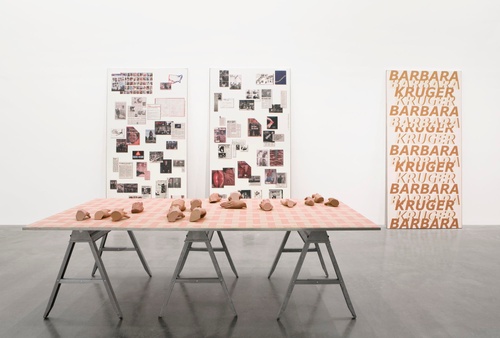 Matt Keegan’s diverse practice includes photography, prints, collage, sculpture, and text-based works, but also extends into publishing through the annual arts publication North Drive Press, which he co-founded in 2003. In his work 1986/2008 New Museum Edit (2008), Keegan combines all of these practices, reconfiguring a selection of texts, research, and sculpture that looks back at the recent past ”the mid-1980s" to shed light on the present moment. In 2008, Keegan embarked on a road trip that loosely followed the trail of the 1986 charity event Hands Across America, for which millions of people held hands in a line across the U.S. to symbolically take a stand against hunger and homelessness. Re-tracing this route, Keegan met thirteen mayors in different cities and cast their hands. His book AMERICAMERICA serves to document this journey and draws larger connections between the years 1986 and 2008 and the Bush and Reagan administrations by looking at how issues, such as poverty, technology, international relations, and AIDS were engaged by the government, the media and artists alike. 1986/2008 New Museum Edit (2008) includes a series of twenty-three portraits of twenty-two-year-olds who are recent graduates from New York-based schools. The photographs, in tandem with the aforementioned works, raise provocative questions directly relevant to Keegan’s peers, such as “How did we get here?” and “How do we move forward?”