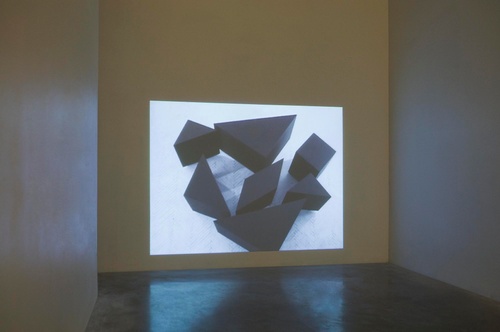 Anna Molska’s video works are compositionally inspired by abstract geometric forms and often influenced by early 20th century constructivist theater. Tanagram (2006-07) combines an outsized version of the titular ancient Chinese puzzle with a pair of muscular boys clad in updated gladiatorial costume. In the game tanagram (literally “seven boards of skill”) players are asked to arrange seven geometric elements to fit within a set of predetermined outlines. Staged over a soundtrack comprised of mock Russian folk music and a song from the Red Army Choir, Molska’s athletic performers converse in Russian using semi-incoherent lines of dialog lifted from a Polish to Russian phrase book, while creating shapes against the white background of the studio floor: one of which bears a striking resemblance to Kazimir Malevich’s landmark Black Square (1915). Inflected by the parodic soundtrack and the flawless bodies that suggest Soviet-era ideals of the perfect worker, Tanagram is a send-up, if not a conflation, of Constructivist and Soviet-style utopian ideals.

Under The Skin: New Video From Poland