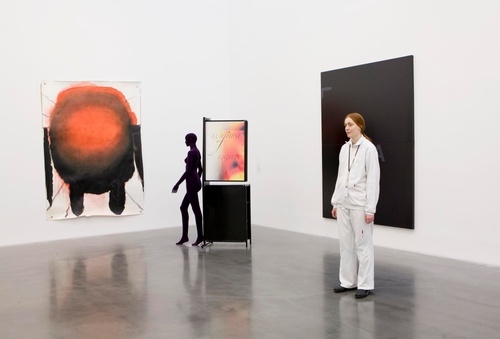 Adam Pendleton’s multivalent practice utilizes appropriated images, texts, and cultural cliches from a broad range of sources, in order to investigate: with a critical eye - identity, power relationships, and the way they are translated into history. His works have taken many forms, including paintings, sculptures, manifestos, text works, and performances. For his series Black Dada (2009), Pendleton has combined cropped sections of conceptual artist Sol Lewitt’s Variations of Incomplete Open Cubes from the 1970s with various excerpts of the phrase “black dada,” which he has borrowed from the title of Amiri Baraka’s 1964 poem “Black Dada Nihilismus.” By overlaying the works of an eminent conceptual practitioner with the words of Baraka, who co-founded the radicalized Black Arts Movement in the early sixties, Pendleton fashions an evocatively layered history, which calls into question received notions of the avant-garde.