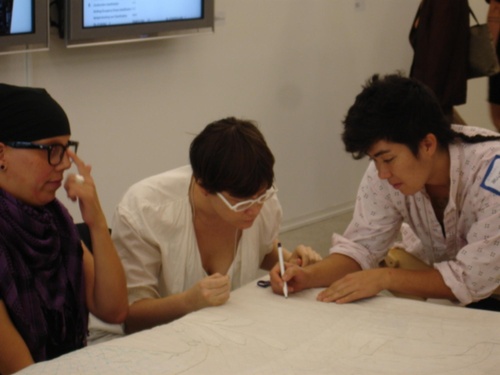 Emily Roysdon’s work grows out of concerns with the politics of representation and language, particularly as they relate to feminism and Queer identity, She is also the co-founder (with Ginger Brooks Takahashi and K8 Hardy) of LTTR, a feminist genderqueer artist collective that, among numerous other activities, published an influential annual art journal. Her work Four Screens as Dialogue (pioneering, devotional, familiar, invasive) (2008) uses a series of images (an inflatable dildo, a picture of an artist’s studio, hands forcibly opening a mouth, an ancient tombstone) as stand-ins for methods and manners of speech in order to obliquely address the laborious task of communicating and making meaning