Shaina Anand and Ashok Sukumaran work individually and collectively with other artists, programmers, filmmakers, and theoreticians to investigate access to local communities, the transmission of information, and the implications of technology in the context of economic globalization. Anand and Sukumaran, together with Sanjay Bhangar founded CAMP in 2007 as a space “in which ideas and energies gather, and become interests and forms.” With 0x2620, Berlin; the Alternative Law Forum, Bangalore; Majlis, and Point of View, Mumbai, CAMP also initiated PAD.MA, Public Access Digital Media Archive, a searchable, viewable online archive of annotated video material, primarily footage, and not completed films, free to download for non-commercial use. PAD.MA opens up a set of images, intentions, and effects present in video footage, and resources that conventions of video-making, editing, and spectatorship have tended to suppress or leave behind. During their residency, Anand and Sukumaran will introduce their practices through a series of public programs and conduct research that will inform their contributions to the “The Generational,” the second New Museum Triennial, opening in February 2012.

PAD.MA, and the Possible: presented by Shaina Anand and Ashok Sukumaran 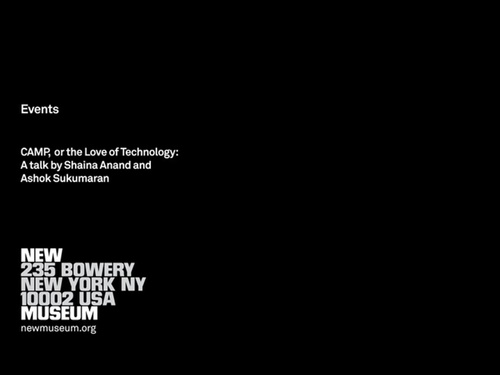 CAMP, or the Love of Technology: a talk by Shaina Anand and Ashok Sukumaran

Al Jaar Qabla al Daar (The Neighbor before the House, Jerusalem, 2009–11): Screening and Discussion with Shaina Anand and Ashok Sukumaran