Gabi Ngcobo is an independent curator, creative researcher, and educator based in Johannesburg. Ngcobo curated “DON’T/PANIC” (2011), a curatorial project that coincided with the seventeenth UN Global Summit on Climate Change (COP17) in Durban, South Africa. She was recently selected to be the first POOL Curatorial fellow, and her exhibition “some a little sooner, some a little later” will open at the Zurich POOL/LUMA Westbau space in June 2013. Her collaborative projects include: “Second to None” (2005) at Iziko South African National Gallery, “Olvida quen soy/ Erase me from who I am” (2005) at CAAM, Canary Islands, Las Palmas, “Titled/Untitled” (2008), a curatorial collaboration with Cape Town–based collective Gugulective, and “Scratching the Surface Vol. 1” (2008) at AVA Gallery, Cape Town. Ngcobo co-curated “Rope-a-dope: to win a losing war” (2010) at Cabinet, New York, “Second Coming, a curatorial collaboration” at Center for Curatorial Studies, Bard College, and “Just How Cold Was It?” at 6-8 Months, a project space in New York. As cofounder of the Center for Historical Reenactments (CHR), an independent project based in Johannesburg, Ngcobo curated “PASS-AGES: references & footnotes” at the old Pass Office in Johannesburg and contributed to the ongoing project “Xenoglossia, a research project,” culminating this year in an exhibition in Johannesburg. Ngcobo is a graduate of the Center for Curatorial Studies, Bard College, New York. She is faculty member at the Wits University School of Arts, in Johannesburg. 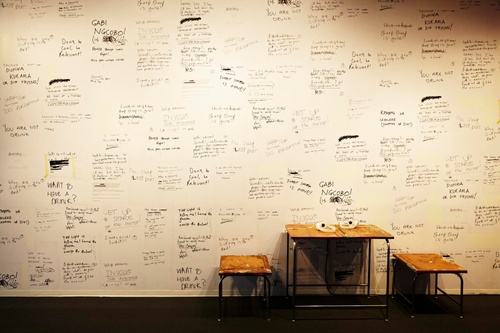 A Proposition by Center for Historical Reenactments: After-after Tears

A Proposition by Gabi Ngcobo: The Panafricannial: Towards a Roaming African Biennial