Since the series premiere of Mad Men in 2007, Weiner has been nominated for a total of eleven Emmys for Outstanding Writing for a Drama Series. In 2012, Weiner was awarded the Brandon Tartikoff Legacy Award, which is given annually to television professionals who exhibit extraordinary passion, leadership, independence, and vision in the process of creating television programming. Weiner is in post-production on his feature film You Are Here, which he wrote and directed. Starring Owen Wilson, Zach Galifianakis, and Amy Poehler, the film will have its world premiere at the upcoming Toronto International Film Festival. Prior to Mad Men, Weiner served as an executive producer and writer on The Sopranos, and with the producing team won the Emmy for Outstanding Drama Series in 2004 and 2006. Before working on The Sopranos, Weiner wrote for various television series, including The Naked Truth, Becker, and Andy Richter Controls the Universe. Born in Baltimore, Weiner studied philosophy, literature, and history at Wesleyan University. He earned his MFA from the University of Southern California School of Cinema and Television. Weiner lives in Los Angeles with his wife, architect Linda Brettler, and their four sons. 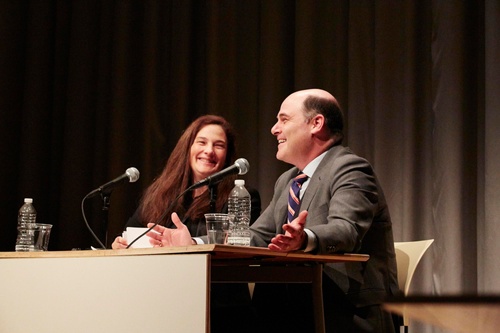