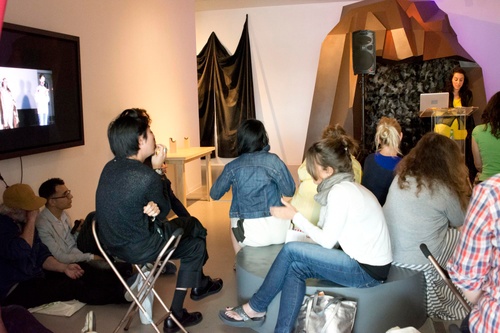 Jaleh Mansoor received her PhD from Columbia University in 2007. She has taught at SUNY Purchase, Barnard College, Columbia University, and Ohio University. Her research on painting in the context of Marshall Plan Italy opens up on to problems concerning materialist aesthetic abstraction in both modern and contemporary art. Mansoor explores the lacunae between biopolitics and theories of subsumption, which art, in turn, mediates prior to its theorization. Mansoor’s areas of teaching and research include modernism, European and American art since 1945, Marxist theory, historiography, feminism, and critical curatorial studies.

She works as a critic for Artforum and is a frequent contributor to October, Texte Zur Kunst, and the Journal of Aesthetics and Protest. Mansoor has written a number of monographic studies on the work of Piero Manzoni, Ed Ruscha, Agnes Martin, Blinky Palermo, and Mona Hatoum. She co-edited an anthology of essays addressing Jacques Rancière’s articulations of politics and aesthetics entitled Communities of Sense: Rethinking Aesthetics and Politics (2010). She is current working on two projects, one that addresses formal and procedural violence in the work of Alberto Burri, Lucio Fontana, and Piero Manzoni; and another on the problem of labor, value, and “bare life” in the work of Santiago Sierra and Claire Fontaine, among other contemporary practices that examine the limits of the human. She is an Assistant Professor of Art History at the University of British Columbia.