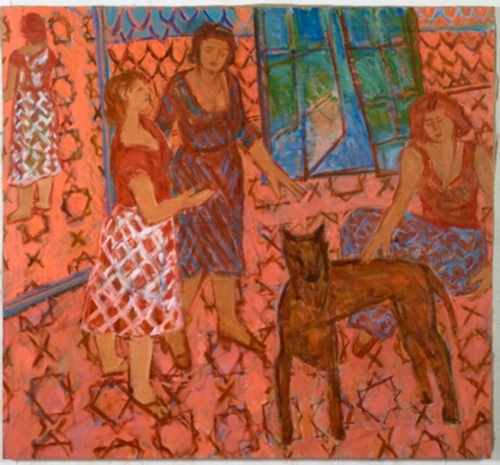 Born and raised in New York City, Barbara Grossman (1943) got her BFA at Cooper Union and studied at the Akademie der Kunst while on a Fulbright Grant to Munich, Germany. Upon her return to the States she was one of a group of young artists who founded the Bowery Gallery in New York City. She received an Ingram Merrill Fellowship, two Connecticut Commission on Arts Awards and is a member of the National Academy Museum where she has received several awards including the Ranger Prize, Adolph and Clara Obrig Prize and the Grumbacher Gold Medal and Art Awards. Since her first one person show in 1973 Grossman has shown regularly. Her paintings and drawings have been exhibited in New York and major cites and Universities in the United States, most notably Dartmouth College, University of Pennsylvania, Hollins University, Indiana University, Mattatuck Museum and the Bowery Gallery. In 2004-5 she had a major survey of her work emanating from Wright State University in Dayton, Ohio that traveled to Lafayette College, Washington and Lee and culminated at the New York Studio School. In 2007 she has a solo show of her paintings and oil pastels at the Bowery Gallery and in 2008 a show in Philadelphia. Ms. Grossman’s work has been reviewed in such journals as the New York Times, Art in America, and The New York Sun as well as smaller newspapers and publications around the country.
For over 30 years Barbara Grossman has taught and been a visiting artist in many institutions such as: University of Pennsylvania, Boston University, Brandeis, Colby College, Knox College and American University. In 2002 she was the Artist in Residence at Hollins University and in 2003 the Artist in Residence at Dartmouth College. She is often a faculty member at Chautauqua Institute as well as the Vermont Studio Center. Most recently she has been teaching at Yale School of Art.