To mark the opening of “Museum as Hub: Bidoun Library Project,” the magazine Bidoun: Arts and Culture From the Middle East presents a slideshow and video clips from the Bidoun Library collection. Babak Radboy, Negar Azimi, Tiffany Malakooti, Lisa Farjam, & Michael Vazquez will present. In addition, for the opening day of the project, Bidoun has invited booksellers usually found outside the New York University library to set up shop outside the New Museum as an extension of their project and as a provocation.

The Bidoun Library is a collection of books, catalogues, journals, and ephemera that traces contemporary art practices as well as the evolution of the various art scenes of the Middle East. The Library premiered at Abu Dhabi Art in November of 2009, and is now being developed as a touring, pop-up resource. The project allows visitors to explore, research, and create wide-ranging connections through materials that are generally unavailable commercially. The Library focuses particularly on materials created by and for artists, primarily published by independent organizations based in the Middle East.

The Bidoun Library is presented in partnership with Abu Dhabi Art. Bidoun would like to recognize the support of the Emirates Foundation, the Bohen Foundation, and the Foundation for Arts Initiatives.
Museum as Hub is made possible by the New York City Department of Cultural Affairs and the New York State Council on the Arts.
Endowment support is provided by the Rockefeller Brothers Fund, the Skadden, Arps Education Programs Fund, and the William Randolph Hearst Endowed Fund for Education Programs at the New Museum. 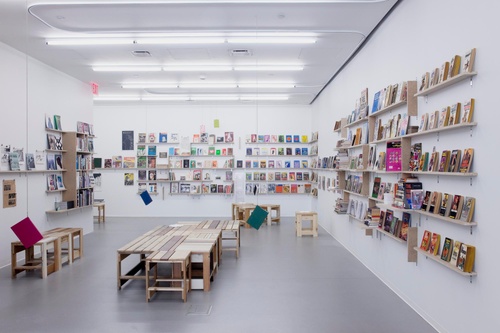