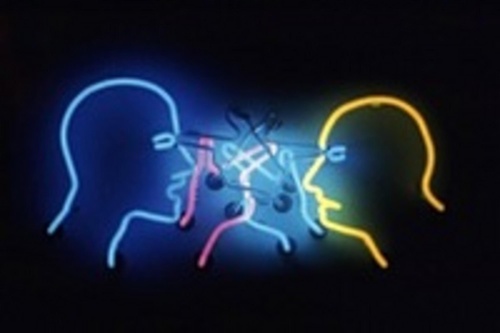 This event brings Peter Plagens and Carlos Basualdo together in conversation to celebrate the release of Bruce Nauman: The True Artist by renowned writer, critic, and artist Peter Plagens, published by Phaidon Press. Bruce Nauman (b. 1941) is one of the most innovative, provocative, and influential artists working today. Always questioning the role of the artist and the very definition of art, Nauman’s pioneering explorations of sculpture, performance, sound, video, and installation have broken new ground and inspired innumerable artists’ careers.
Bruce Nauman: The True Artist is a personal and authoritative account of the world-famous sculptor, photographer, and video artist, written by Plagens who has known Nauman for over forty years. The book surveys Nauman’s entire career, highlighting pivotal works such as Self Portrait as a Fountain and Art Make-up, as well as many of his lesser-known pieces. Confronted with what to do in his studio soon after graduating, Nauman had the simple but profound realization: “If I was an artist and I was in the studio, then whatever I was doing in the studio must be art. At this point, art became more of an activity and less of a product.” Bruce Nauman: The True Artist explores the artist’s direct relationship to the place where Nauman makes art—starting with the artist’s youth in Fort Wayne, Indiana, to his graduate work at the University of California, Davis, to present day. Nauman’s continual search for new sources of expression has led him to experiment with a wide variety of mediums and investigate the relationship between words and images.
Peter Plagens, best known for his work as an art critic for Newsweek, has known Nauman for over forty years, and in his own words, describes this book as, “me trying to get at the real truth of Bruce Nauman’s work.” They first met in 1970, when their studios were a block apart in Pasadena, California, and they played basketball together every Sunday. Since then, Plagens has pursued a real understanding of his friend’s art and in this book presents it from his uniquely insightful perspective.
Peter Plagens was a Senior Writer and staff art critic at Newsweek from 1989–2003, for which he continues to write occasional art criticism as Contributing Editor. His writing has appeared in Aperture, Art in America, ARTnews, Art & Auction, Artforum, Art Review,Bookforum, the Los Angeles Times, the Nation, New York Observer, and the New York Times among others. He is the author of Sunshine Muse, Time for Robo, and Moonlight Blues. He has also written catalogue essays for the Galerie Nationale du Jeu de Paume, the Fellows of Contemporary Art, CUE Art Foundation, and the Modern Art Museum in Fort Worth, Texas. He is also a painter, whose work has appeared in many exhibitions, including a retrospective at the University of Southern California in 2004. Plagens lives in New York City.