In his new performance DISCOTROPIC (2015), niv Acosta explores the relationship between science fiction, disco, astrophysics, and the black American experience. Conceived as a “living graphic novel, manifest in episodical live events” the performances reflect the artist’s interest in the role of black presence in sci-fi history. DISCOTROPIC is inspired by actor Diahann Carroll, who starred in the TV movie Star Wars Holiday Special (1978). Cast by NBC at the behest of donors and audience members, who insisted that a black person appear on the show, Carroll appears only as a holographic fantasy—an illusion that distills the ways in which the black female body has been consumed in mass media: as alien, bodacious, and marginalized. Acosta’s DISCOTROPIC reconsiders past futures, like those in Star Wars, while claiming a fantastical site of possibility through a cast whose imaginative engagement with science fiction rewrites its dominant narratives. Assembled by Acosta on the basis of shared interests in queer politics and Afrofuturism, the performers include Monstah Black, André D. Singleton (aka Brohogany Opulence), and Acosta himself. Together the cast are, in their own words:

“creating our own fantastical world/s via dance, text, and sculpture that seeks to create a space for people of a marginalized experience. A space where we can be together, honest, relaxed, inspired, and self-empowered. These are ingredients for a revolutionary space. In creating DISCOTROPIC we meditate on sparse unity, quiet virtuosity, and internalized spectacle departing from our collective queer lens.” 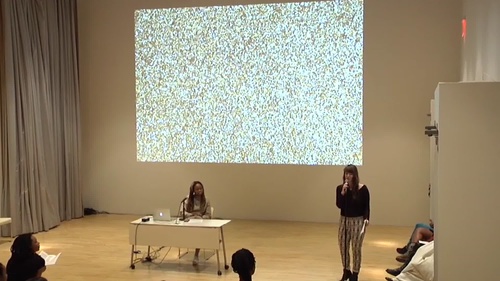 Premiere of DISCOTROPIC by niv Acosta