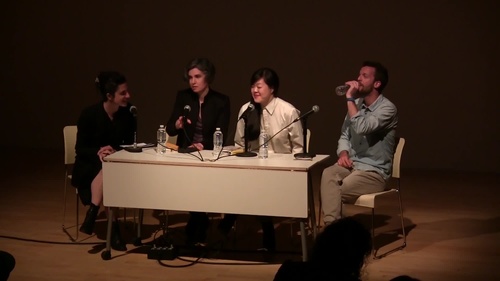 Further elaborating her research as part of the R&D Season: SPECULATION, Chelsea Knight has organized a screening and discussion with a group of artists who all pursue, in various ways, the promise of disrupting notions of seamless, unified reality.

Jen Liu’s works in video originate in an exploration of the desire to bring industrial production back to the US. This desire—manifested in real political platforms and economic policy—is itself a piece of speculation in its narrow economic sense, mortgaging the present for a hoped-for, but far-from-guaranteed, future. For this program, she will screen videos that work loosely off the premise of a future all-female industrial workforce. Different, conflicting possibilities are lined up against each other, while objects and signs repeat themselves in altered contexts—inhabiting a similar consciousness-plane as the humans in the videos. Rather than convey a hegemonic, univocal reality consolidated and motivated in a single direction, her work presents a zig-zagging reality, resembling the alternating possibilities of human/object protagonists in a mail-order catalogue: this and/or this and/or this.

Melika Bass is an artist who creates experimental narrative films and experiential installations in the genre of speculative fiction. Bass’s enigmatic, atmospheric tales revolve around fractured stories that slip between hyperreality and fantasy. Her films focus on the everyday, encompassing a series of rituals or tasks—eating, working, sleeping, caretaking—and endowing them with the quality of sacrament. These daily activities, performed with deliberation, are simultaneously familiar and strange, mundane and monumental. The snow-globe worlds of Bass’s films invite viewers to accept a certain dream logic, to construct meaning from an immersion in durational experience, abstracted from the plot, and to project their own histories into the films’ open and jagged spaces.

Peter Hopkins Miller makes art from a position of magic, thereby enabling him to speculate about how a world might operate under conditions other than those that we generally accept to be true. His films generally investigate the cinema and its constituent, irreducible elements (e.g., lens, light, audience, projection). Miller employs filmic strategies that cross the viewer’s “axis-of-feeling” with his or her “axis-of-knowing” in an attempt to ask questions long disregarded.