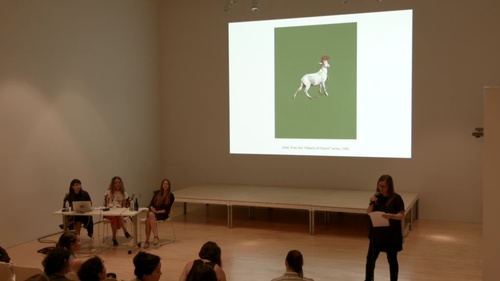 Join artists Mary Simpson and Sara VanDerBeek along with Associate Curator Margot Norton for a discussion on the work of artist Sarah Charlesworth. This event is being held in conjunction with “Sarah Charlesworth: Doubleworld,” the first major survey exhibition in New York of the work of the influential artist.​

Over four decades, Charlesworth investigated the language of images in our culture, dissecting pictorial codes and conventions while drawing attention to the role of photography in mediating our perception of the world. This discussion will probe the allegorical as a function within painting and photography, and specifically in relation to the mythological and psychological resonances within Charlesworth’s own practice. The speakers will consider still life, abstraction, and the production of desire as aspects of the allegorical that Charlesworth both put to use and deftly interrogated throughout her career.

Mary Simpson was born in Anchorage, Alaska, and currently lives in New York. She received an MFA from Columbia University and attended the Whitney Independent Study Program. Her work has been shown at Bortolami, On Stellar Rays, Rachel Uffner, and Simone Subal, all New York; Almine Rech, Brussels; Hilary Crisp, London; the Seattle Art Museum; and Boise Art Museum, Idaho. She has presented film screenings, projects, and lectures at the Artist’s Institute and the Kitchen, both New York; Henry Art Gallery, Seattle; and CAM2, Madrid. She teaches at the Cooper Union, Columbia University, and George Washington University.

Sara VanDerBeek lives and works in New York. Her recent projects have included solo exhibitions at the Baltimore Museum of Art and Museum Boijmans van Beuningen, Rotterdam. She has had solo exhibitions at the Hammer Museum, Los Angeles; the Whitney Museum of American Art, New York; Metro Pictures, New York; Fondazione Memmo, Rome; Altman-Siegel, San Francisco; and the Approach, London. Her work has also been included in various group exhibitions, including “Amazement Park: Stan, Sara and Johannes VanDerBeek” at the Tang Museum, Saratoga Springs, NY (2009–10), as well as the annual exhibition “New Photography” at the Museum of Modern Art, New York (2009). Upcoming projects include her participation in “Photo-Poetics: An Anthology,” a group exhibition organized by Jennifer Blessing at the Solomon R. Guggenheim Museum, New York (2015–16). 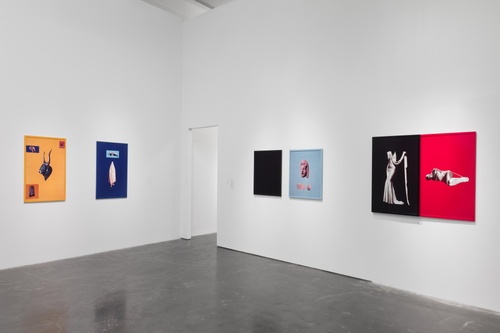