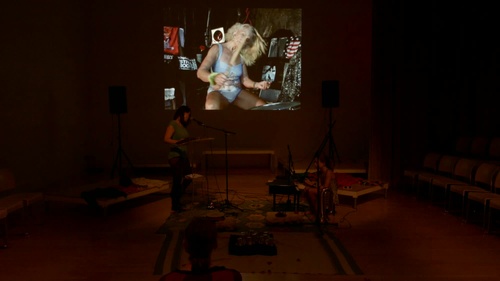 “Temporary Arrangements” is a unique concert series that invites artists to form one-night-only bands and stage their premiere—and, by definition, also final—performances at the New Museum. Curated by Wynne Greenwood, the series emerges out of the DIY ethos of Greenwood’s legendary feminist band Tracy + the Plastics, an all-girl group that toured the country from 1999 to 2006, in which she played all three parts—frontwoman, drummer, and keyboardist. “Temporary Arrangements” proposes a collaborative model that is makeshift and provisional from the outset, asking what can happen when a group is formed without future expectations in mind.

Kicking off the series is a band organized by Anna Oxygen, the self-described “mystical pop avatar of Anna Huff.” Huff has released several albums of electronic and acoustic music, including her solo album This is an Exercise and a fantasy metal rock opera soundtrack for her performance group Cloud Eye Control. Her solo and performance work has been presented at MoMA P.S.1, Long Island City; the Seattle Art Museum; the Los Angeles County Museum of Art; the Hammer Museum, Los Angeles; the Portland Institute for Contemporary Art; and Röhsska Museet, Gothenburg, Sweden; among other venues.