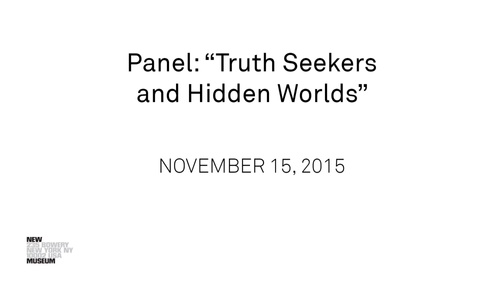 This panel takes its cue from Jim Shaw’s interest in religion and belief systems in contemporary American cultural life. It will consider a variety of religious, occult, esoteric, New Age, and conspiracist organizations, and the materials, images, and language that are created in their service, in order to examine the practice of existential questioning and populist pursuit of truth. As with Shaw’s collages and collections of cultural detritus, this panel is conceived with a certain ambivalence toward the “truthiness,” plausibility, or righteousness of each organization and its creed, and instead aims to address the phenomena of belief, pathos, and doubt that drive popular aspirations for a better—or better ordered—life.

Gary Carrion-Murayari is Kraus Family Curator at the New Museum.

Jonah Freeman was born in 1975 in Santa Fe, NM and lives and works in New York City. He holds a degree in Film Production and Dramatic Writing from NYU Tisch School of the Arts.

Justin Lowe was born in 1976 in Dayton, OH and lives and works in New York City. He received his MFA from Columbia University in 2004.

Suzanne Snider is a writer, oral historian, and the founder and director of Oral History Summer School.
Her writing and audio projects have been published in the Guardian, Believer, the Washington Post, Legal Affairs, and the Oakland Standard, as well as several anthologies and artist catalogues. After receiving an MFA in nonfiction from Columbia University (2003) as a Hertog Fellow, she pseudonymously published a book with Grove Press (2004; reprinted by Random House Japan, 2005). She received a BA from Wesleyan University in English and Dance. She has worked on numerous oral history and documentary projects as a consultant, trainer, and interviewer for institutions including New York Academy of Medicine, HBO Productions, the Center for Reproductive Rights, MoMA, Columbia University’s Center for Oral History, and the Prison Public Memory Project, among others. Her own oral history projects have addressed disappearing labor forces, rehabilitative medicine, parapsychology, and feminist presses. She is especially interested in designing social, participatory experiences around audio archives.

Her work has been supported through fellowships from Yaddo, the MacDowell Colony, the Schlesinger Library at the Radcliffe Institute for Advanced Study, and the UCross Foundation. She serves on the advisory boards of the Judd Foundation Oral History Project and the Happy Ending Music and Reading Series. She has taught at Columbia University, New York University, and the School of New Resources. Currently, she teaches at the New School and is completing a book about a divided commune in middle America.

Kate Valk is an actor and founding member of the Wooster Group, a company of artists who make work for theater, dance, and media. Valk joined the Wooster Group in 1979, and has since performed internationally in roles she has created with the group for productions that include L.S.D. (… Just the High Points…) (1984), Brace Up! (1991–94, 2003), House/Lights (1997–2001, 2005), The Emperor Jones (1992–96, 1998, 2006–09), Poor Theater (2005), Hamlet (2007), and Vieux Carré (2009–13), among others. Valk directed the Wooster Group’s Early Shaker Spirituals, which premiered at the Performing Garage in 2014. She received an Obie Award for Sustained Excellence in Performance (1998), a New York Dance and Performance Award (“The Bessie Awards”) for Outstanding Performing with the Wooster Group (2002), and a Foundation for Contemporary Arts Grant to Artists award (2003). She founded two arts education programs with the Wooster Group: an in-school theater curriculum at Dr. Sun Yat Sen Middle School in New York’s Chinatown that launched in 1992 and the Summer Institute, a free three-week workshop for public high school students in New York that opened in 1997. Valk serves as director emerita of both of these programs. 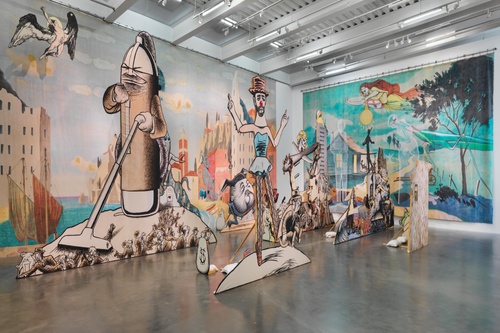 Jim Shaw: The End is Here