Macha Colón, a character created by artist Gisela Rosario Ramos and inspired by the iconic actor and drag queen Divine, is the exuberant front woman of the band Macha Colón y los Okapi. In Puerto Rico and beyond, Colón has gained a cult following among queer and feminist communities for whom her songs have become anthems for the possibility of joy. As defiantly stated on one of the band’s posters: “In this classist, racist, heterosexist, patriarchal country, trying to be happy is in itself revolutionary work.” Activating masks Santiago Muñoz has produced during her residency at the New Museum, the performance marked a collaboration between Santiago Muñoz, Colón, and lighting designer Marién Velez, and featured a concert by Macha Colón y los Okapi. Santiago Muñoz introduced the concert with a reading.

This event was organized on the occasion of “Beatriz Santiago Muñoz: Song, Strategy, Sign,” an exhibition and residency organized by the Department of Education and Public Engagement as part of its R&D Season: LEGACY in which Santiago Muñoz premiered a new three-channel video That which identifies them like the eye of the Cyclops (2016).
The video’s three parts are titled as sequence: One/Song, Two/Strategy, andThree/Signs. The footage emerged during years of contact between Santiago Muñoz and a group of women, and each channel corresponds loosely to a different theme in Monique Wittig’s 1969 novel Les Guérillères, which describes a world where the patriarchy has fallen after a bloody war between the sexes. Like Les Guérillères, the video closely follows the sensorial and material worlds of the women and imagines a post-patriarchal future. Unlike the characters in Wittig’s novel, however, the women portrayed in Santiago Muñoz’s videos are real, and the story is rooted in the specific place and time that they inhabit—including Caribbean cities, bankrupted states, and coastal towns.

Santiago Muñoz’s exhibition at the New Museum also featured a set of commissioned masks as well as the silent 16mm film Black Beach/Horse/Camp/The Dead/Forces(2016), which weaved together portraits of those living in Vieques, Puerto Rico—the site of a bombing range used by the US Navy for sixty years. Together, the film, three-channel video, and masks in “Beatriz Santiago Muñoz: Song, Strategy, Sign” served as testaments to the individuals who forge their own terms for how to live, remember, and advance their own evolving histories. 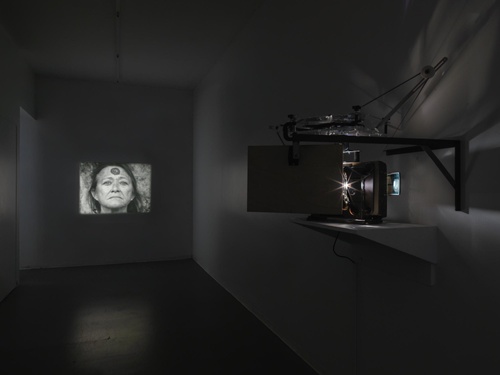