“Between Dog and Wolf: On Sight and Sound in Space” plumbed questions concerning visual and aural perception, taking its cue from the synesthetic facets prevalent in the work of Anri Sala. By bringing together various scholars and cultural producers to discuss their own research and practices, the panel addressed the interplay between visuality and aurality in articulating spaces of architecture, memory, and history.

About the Panelists
Natalie Bell is Assistant Curator at the New Museum.

Christoph Cox is Professor of Philosophy at Hampshire College and a visiting faculty member at the Center for Curatorial Studies, Bard College. He is the author of Sonic Flux: Sound, Art, and Materialism (forthcoming) and Nietzsche: Naturalism and Interpretation(1999), and the coeditor of Realism Materialism Art (2015) and Audio Culture: Readings in Modern Music (2004). The recipient of an Arts Writers Grant from Creative Capital and the Andy Warhol Foundation for the Visual Arts, Cox is Editor-at-Large at Cabinet magazine. His writing has appeared in October, Artforum, Journal of the History of Philosophy, the Wire, the Journal of Visual Culture, Organised Sound, the Review of Metaphysics, and elsewhere. He has curated exhibitions at the Contemporary Arts Museum Houston; the Kitchen, New York; CONTEXT Art Miami; New Langton Arts, San Francisco; and G Fine Art Gallery, Washington, DC; among other venues.

Ernst Karel makes experimental nonfiction sound works for multichannel installations and performances. His recent projects are edited and composed using unprocessed location recordings; in his performances, he sometimes combines these with analog electronics to create pieces that move between the abstract and the documentary. His recent sound projections have been presented at Oboro, Montreal; EMPAC, Troy, NY; Arsenal, Berlin; and in the 2014 Whitney Biennial. His sound installations created in collaboration with Helen Mirra have been exhibited at Culturgest, Lisbon; KW Institute for Contemporary Art, Berlin; Audiorama, Stockholm; the MIT List Visual Arts Center, Cambridge; and in the 2012 São Paulo Biennial. His video with multichannel sound collaborations include Ah humanity! (2015, with Lucien Castaing-Taylor and Véréna Paravel) and Single Stream(2014, with Toby Lee and Pawe? Wojtasik). He recently did sound work on the nonfiction films The Iron Ministry (2014), Leviathan (2014), and Manakamana (2013), which were all produced in the Sensory Ethnography Lab at Harvard University, where, as a lecturer on anthropology, he currently teaches a class on sonic ethnography.

Marina Rosenfeld lives and works in New York. Her works include large-scale compositions for choir, orchestra, and complexes of loudspeakers; a series of conceptual electric guitar orchestras (Sheer Frost Orchestra); and a custom sound system (P.A.) that she has composed for and deployed in monumental sites, including New York’s Park Avenue Armory and Australia’s Midland Railway Workshops. Rosenfeld has also performed as an experimental turntablist since the late ’90s, working mostly with handcrafted dub plates, alongside collaborators from Christian Marclay to Warrior Queen to the Merce Cunningham Dance Company. Her work has been presented internationally, including at the Museum of Modern Art, New York; the Stedelijk Museum, Amsterdam; Tate Modern, London; Bergen Kunsthall, Norway; and Secession, Vienna; and in the Whitney Biennial, New York; the Liverpool Biennial; Performa, New York; and Wien Modern, Vienna. Rosenfeld’s projects in 2016 include collaborations with choreographer Maria Hassabi at the Museum of Modern Art, New York, and the Walker Art Center, Minneapolis, and solo presentations at the Museum of Contemporary Art Cleveland and House of Gaga, Mexico City. Rosenfeld joined the faculty of Bard College’s MFA program in 2003 and has cochaired its Department of Music/Sound since 2007. 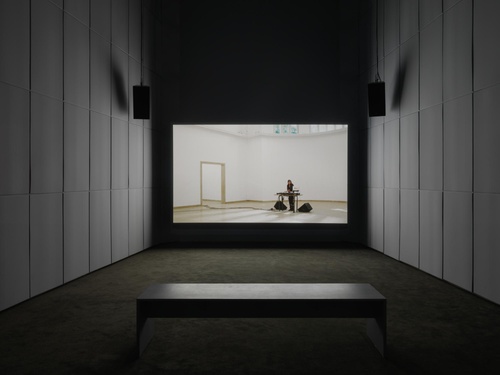