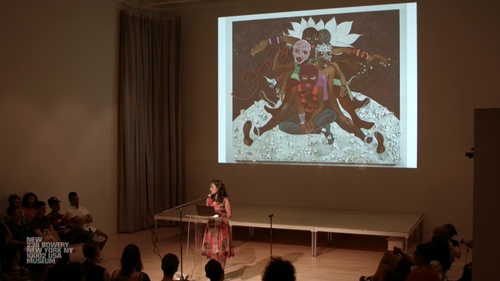 For this lecture, organized in conjunction with “Simone Leigh: The Waiting Room,” artist Chitra Ganesh drew upon her recent visual research on the aesthetics and performative gestures of protest, exploring the notion of disobedience as it has been mobilized in political protest and social movements outside of the United States. Ganesh shared images and texts that elaborate on forms of disobedience—as harnessed most specifically in the Global South—that challenge structural power and actualize social change, drawing attention to state-sponsored violence and erasures enacted on human bodies.

For over a decade, Ganesh’s drawing-based practice has probed mythological and queer narratives to develop complex visual iconographies of female subjectivity and power. Her work has been widely exhibited locally and internationally, and she is the recipient of numerous awards, including the John Simon Guggenheim Fellowship in the Creative Arts.