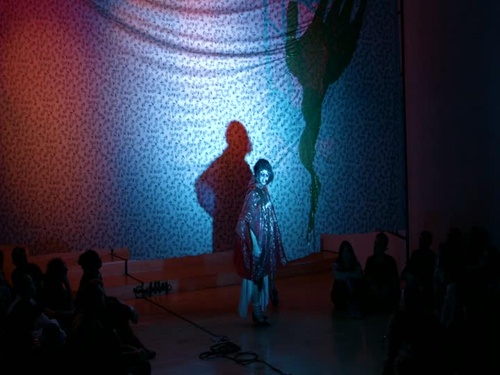 Geo Wyeth’s performance Juice CrosxxxSing (2017), presented as a part of the exhibition “Trigger: Gender as a Tool and a Weapon,” features two of Wyeth’s figures making their US debut: the Lost Tourist and CrosxxxSing Guard, friends who have been separated and must navigate a series of hurdles in search of one another. In the artist’s own words:

The CrosxxxSing Guard moves into the Lost Tourist in the air, guided by the ravages of bass. Children’s voices permeate a black box where we chase something to dream about. Dutch weather requires raingear and a target becomes a stop sign. In the middle, where I get to live, I can only wade for my love to come home from the airport safely. At home, I got to swim, with my Dutch raingear on. And now I’m just a slow red sugar, and that’s a fun lonely hole. Dragging through the ages and across the street later, only a baby ghost, Juice. You folked me for life, a bunch of cavities in this city! I wanna say remember? And then lick them all over but I don’t. From eating cheeseburger? Or not pronouncing Ls and Rs while pissing from the top of the slide. Across the street, in powder form, thank you for coming Juice, I need you. Folk Juice, you’re killing me and I need to get away for a while, you completely understand yeah? From the cop of Upper Hell to the slut of tomorrow’s bottom theater, I can’t let you go, and I’m begging for it Juice. Stay on it, cause TV don’t stack, and someone flattens napkins over and over. Across the street in little packets, crushed between my legs—I’m busy limping or pretending. A sort of sad baby ghost, just dragging. Juice, I can’t watch TV so I go outside and look for you across the street and someone is singing What Do I Do With My Love?