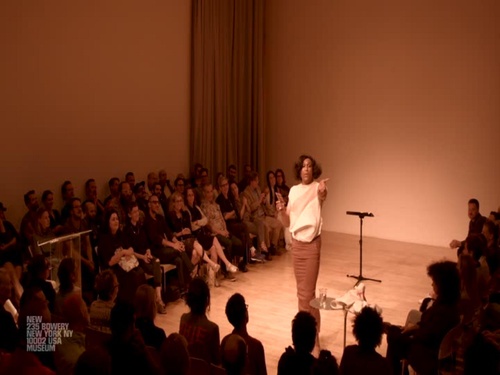 Legendary artist and punk icon Vaginal Davis kicks off the public programming for “Trigger: Gender as a Tool and a Weapon” with a one-night-only performance in the New Museum Theater. Davis’s vivacious work deploys radical politics, makeshift aesthetics, and wicked humor in powerful artworks spanning a variety of mediums, from music and performance to painting, sculpture, and film. In the late 1970s, as the frontwoman for the punk band the Afro Sisters, Davis drew inspiration from Angela Davis and the Black Panthers. Her unique brand of punk drag aesthetics—deemed “drag terrorism” by the late scholar José Esteban Muñoz—revels in a refusal to be recuperated by the mainstream. “I was always too gay for the punks and too punk for the gays. I am a societal threat,” Davis recalled in a recent interview with Grace Dunham.

Vaginal Davis (b. 1969) is a performer and artist who resides in Berlin. Davis has performed widely, including recently for documenta 14. Her work has been exhibited in solo exhibitions at 80WSE (2016), Invisible-Exports (2015), Cooper Union (2015), and PARTICIPANT INC. (2012), in New York, as well as in group exhibitions at the National Museum of Contemporary Art, Bucharest, Romania (2009); the Museum of Modern and Contemporary Art Rijeka, Croatia (2009); and the Yerba Buena Center for the Arts, San Francisco (2008), among many others. Davis was a member of the Los Angeles–based punk band ¡Cholita! The Female Menudo. A prolific filmmaker, she has also produced zines such as Fertile LaToyah Jackson, among many other publications.