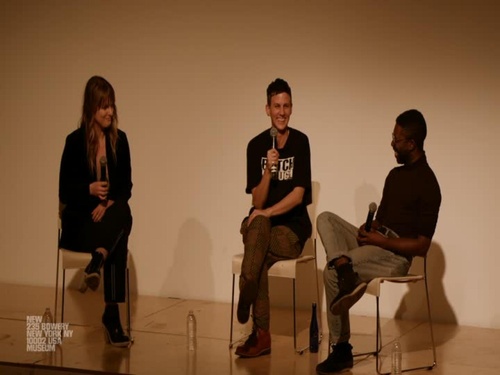 For one night only, A.K. Burns and A.L. Steiner screened Community Action Center(2010), a ribald sixty-nine-minute feature that reimagines how to represent queer erotic exchange. In the video, garden hoses burst into spray, eggs release creamy yolks, corn husks are peeled down to reveal their golden interiors, and a pizza delivery person is lured inside by a powerful witch. Proposing a DIY attitude toward pleasure, the action-packed video eschews artificial sets and lighting, commercially produced objects, and heterosexist narratives. Community Action Center invokes the tropes of porn only to upend the stable top/bottom power dynamics that can so often play out in flicks of the mainstream variety; whole bodies become erogenous zones and sites of fantasy. Burns and Steiner stipulate that Community Action Center must be viewed communally, in contrast to the way pornographic material is typically accessed today—on a laptop, phone, or private playback device. Harkening back to the adult movie theaters of a past era, the video proposes a shared erotics and locates power in watching together.
Burns and Steiner selected two short videos to be screened with Community Action Center: Kajsa Dahlberg’s Female Fist (2006), a film shot with the lens cap left on the camera while Dahlberg interviewed Copenhagen’s queer feminist community about the possibility of making a porn film in the lesbian activist scene there, and Paul Mpagi Sepuya’s Subject-Object Proof no.3 (Nico, smelling) (2009), which explores the relationships and negotiations between artist, sitter/subject, and viewer. The screening was followed by a conversation between Burns and Sepuya.
A.K. Burns (b. 1975) is an interdisciplinary artist and educator residing in Brooklyn and a co-founder of W.A.G.E. (Working Artists and the Greater Economy). Her work has been exhibited widely, including as the artist-in-residence through the New Museum Department of Education and Public Engagement’s Spring R&D Season: BODY earlier this year, and in solo and two-person exhibitions at Callicoon Fine Arts, New York (2017); Portland Institute of Contemporary Art, Portland, OR (2016); Participant Inc, New York (2015); Johannes Vogt Gallery, New York (2012); Tate Modern, London (2011); REDCAT, Los Angeles (2011); Taxter & Spengemann, New York (2010); Horton Gallery, Berlin (2010); Recess, New York (2010); and elsewhere.
A.L. Steiner (b. 1967) is an interdisciplinary artist, writer, and curator living in Brooklyn and Los Angeles; a cocurator of Ridykeulous; and a cofounder of W.A.G.E. (Working Artists and the Greater Economy). She is MFA Faculty in Visual Arts at Bard College, Yale University, and the School of the Art Institute of Chicago. Her work has been exhibited widely, including recent solo and two-person exhibitions at Koenig & Clinton, New York (2016); Arcadia Missa and Deborah Schamoni Galerie, London (2016); Blum & Poe, LA (2015); and the Kitchen, New York (2014).