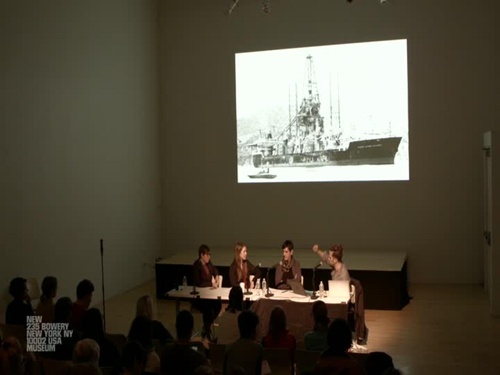 The New Museum and Inhabitants with Margarida Mendes presented Mining the Deep Sea Frontier, two back-to-back sessions taking as their premise that deep sea mining is an imminent threat to global ecosystems. This series of talks addressed the global turn towards blue economy and the new horizon of deep sea extractivism, in what is called “a new gold rush.” Mining the Deep Sea Frontier parsed arguments from environmental activists and the mining industry, policymakers, biodiversity experts, and ocean researchers. This program explored what constitutes the extractivist frontier: from historical narratives of the ocean to the technological development required for deep sea mining. Structured around two thematic threads, the discussions were prompted by different mediating agents, followed by a debate and Q&A.
For 2018 Triennial: “Songs for Sabotage,” Inhabitants created a new web series, What is Deep Sea Mining? (2018) with Margarida Mendes. This series was part of a larger commission focused on deep sea mining, produced by TBA21—Academy, an itinerant site of cultural production and interdisciplinary research focused on urgent ecological, social, and economic issues concerning the oceans. In two episodes, Episode 1: Tools for Ocean Literacy and Episode 2: The Blue Economy, a New Gold Rush?, Inhabitants and Mendes delved into deep sea mining, a new frontier of mineral extraction at the bottom of the ocean.
Session 1: What is Deep Sea Mining?
With keynotes by Lauren Kubiak and Katherine G. Sammler, this session introduced the various types of materials, technologies, and stakeholders involved in deep sea mining and clarified its processes and consequences. It introduced the scenarios and geographies planned for this future type of experimental mining, particularly in the context of the Pacific, taking into account that first tests of the process have already begun in Papua New Guinea and more are planned for other island territories in the region.
Session 2: Deep Sea Frontier
Frontiers regimes are being negotiated as the rush towards deep sea mining brings about a new horizon for extraction. With a recorded introduction by Stefan Helmreich, and keynotes by D. Graham Burnett and Jessica F. Green, this session explored historical and ontological questions surrounding deep sea ecosystems by speculating about complex forms of planetary life and its origins, while introducing policy debates. Speakers addressed the shift towards underwater colonialism and how visual and rhetorical strategies serve as tools for representing the unknown, be they in the fields of scientific analysis, politics, or data visualization.
Lauren Kubiak works on the management and conservation of biodiversity and ecosystems of the high seas and the Arctic. She was previously an energy policy analyst in NRDC’s Energy & Transportation program, for which she worked on renewable energy and energy-efficiency policies within the context of the US Environmental Protection Agency’s Clean Power Plan. Kubiak received her bachelor and masters degrees from Stanford University’s Earth Systems program.
Katherine G. Sammler is an Assistant Professor at California State University Maritime Academy in the department of Global Studies and Maritime Affairs. She has a background in physics and atmospheric sciences and received her doctorate in geography from the University of Arizona. She conducts research on issues where politics and power intersect with geophysics and environmental change. Her work has included investigations of competing interests in outer space access and resources, resistance to Pacific seabed mining prospecting, and the construction of Mean Sea Level as a vertical datum in relation to legal implications of rising seas.
Stefan Helmreich is a professor of anthropology at MIT. His research has examined how biologists think through the limits of “life” as a category of analysis. His book Alien Ocean: Anthropological Voyages in Microbial Seas (University of California Press, 2009) is a study of marine biologists working in realms usually out of sight and reach: the microscopic world, the deep sea, and oceans outside national sovereignty. He received his PhD in Anthropology from Stanford University.
D. Graham Burnett works at the intersection of critical and creative practices in the humanities. He holds a PhD in the History and Philosophy of Science from Cambridge University, and he teaches at Princeton University. He has written on history of natural history, earth sciences, cartography, navigation, oceanography, ecology, and environmentalism, and his publications include The Sounding of the Whale: Science and Cetaceans in the Twentieth Century (University of Chicago, 2012). His collaborative project The Oannes Scrap was part of TBA—21’s “The Current” at the 2016 Kochi Biennial.
Jessica F. Green is an assistant professor in the environmental studies department at New York University. Her research focuses on transnational private regulation and its interactions with authority. She is the author of Rethinking Private Authority: Agents and Entrepreneurs in Global Environmental Governance (Princeton, 2014).
Inhabitants is a website and online video channel for exploratory video and documentary reporting. Inhabitants produces and streams short-form videos intended for online distribution, with each episode focusing on a different topic or working in the format of thematic webseries.
Margarida Mendes is an educator, curator, and activist living and working in Lisbon, and a member of the Oceano Livre environmental movement. Exploring the overlap between cybernetics, philosophy, ecology, and experimental film, her research investigates the dynamic transformations of the environment and their impact on societal structures and cultural production. She directed the project space the Barber Shop in Lisbon from 2009–2015, and in 2016 she was part of the curatorial team of the 11th Gwangju Biennale. She is editor of Matter Fictions (Sternberg Press, 2017). 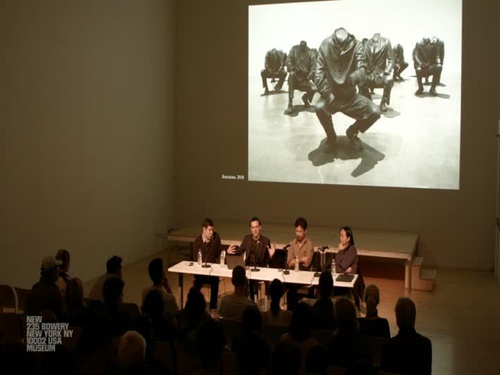