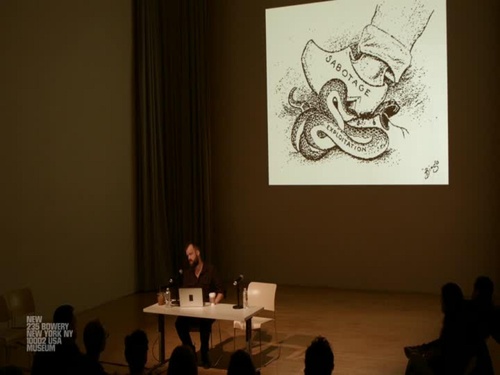 Author, theorist and artist Evan Calder Williams’s contribution to the 2018 Triennial: “Songs for Sabotage” exhibition catalogue, an essay titled “The Kitten in the Wheat,” outlines a brief history and theory of the notion of sabotage. His forthcoming book The Fine Thread of Deviation: A Theory of Sabotage (Verso, 2019), expands on this reading. Introduced by one of the exhibition’s curators, Gary Carrion-Murayari, Calder Williams presented from this body of research.

Evan Calder Williams is the author of Combined and Uneven Apocalypse; Roman Letters; Shard Cinema, and two forthcoming books, Prowling Forms and The Fine Thread of Deviation: A Theory of Sabotage. He is the translator, with David Fernbach, of a forthcoming new edition of Mario Mieli’s Towards a Gay Communism. His writing has appeared in Film Quarterly, WdW Review, the Italianist, La Furia Umana, World Picture, the Journal of American Studies, Mute, Estetica, and the New Inquiry, amongst other publications. He is an editor of Viewpoint Magazine and a founding member of the film and research collective Thirteen Black Cats. He was an artist-in-residence at ISSUEProject Room and has presented collaborative films, performance, and audio works at La Biennale de Montréal, the Serpentine Gallery, Images Festival, mumok, the Festival du Nouveau Cinéma, Portikus, the Whitney Museum, Tramway, Swiss Institute, Artists Space, and the Ljubljana Biennial of Graphic Arts. He received a PhD in Literature from the University of California Santa Cruz and was a Fulbright Fellow in Italy. He teaches theory and history at the Center for Curatorial Studies at Bard College.