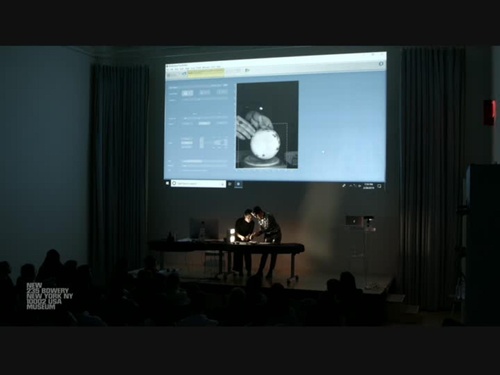 In February 2019, the New Museum affiliate Rhizome presented Physical Tactics for Digital Colonialism, a performance-lecture by artist Morehshin Allahyari, commissioned by Rhizome, which illuminated Allahyari’s concept of digital colonialism in relation to the technology of 3-D printing. The event was presented in conjunction with the group exhibition “The Art Happens Here: Net Art’s Archival Poetics.”

Since 2016, Allahyari has advanced the concept of digital colonialism to characterize the tendency for information technologies to be deployed in ways that reproduce colonial power relations. This performance focused on the 3-D scanner, which is widely used by archaeologists to capture detailed data about physical artifacts. Describing the device as “a tool of witchcraft and magic,” Allahyari reframed 3-D scanning as a performative, embodied act with open-ended political potential. Working with a selection of replicas of cultural artifacts from the Middle East, Allahyari performed live 3-D scans while she was speaking about the objects’ long histories as symbols and relics and their recent appropriation in digital form by Western institutions, considering how these narratives intersect materially and poetically and how they may be resituated and rewritten.

“The Art Happens Here: Net Art’s Archival Poetics” jointly featured works related to Allahyari’s series Material Speculation: ISIS (2015–16). Described by the artist as an exploration of the “petropolitical and poetic relationships between 3D Printing, Plastic, Oil, Technocapitalism, and Jihad,” the project centers around an effort to 3-D print replicas of twelve artifacts from the ancient cities of Hatra and Nineveh, which were destroyed by ISIS in 2015.