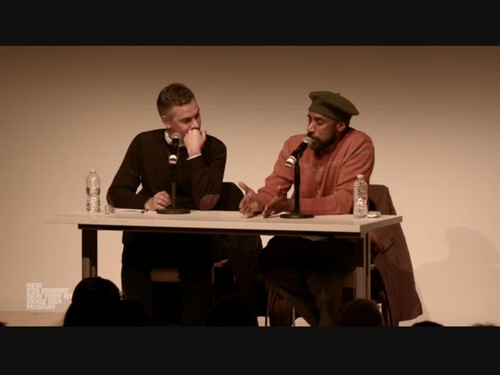 In March 2019, the New Museum presented a special conversation between artist Nari Ward and Massimiliano Gioni, Edlis Neeson Artistic Director of the New Museum, on the occasion of Ward’s New Museum exhibition, “We the People.” One of the most influential sculptors of this time, Ward transforms found material to speak to both personal memory and the complex political and social realities of race, immigration, and national identity. His sculptures and installations evoke a variety of folk traditions and acts of creative recycling native to his home country of Jamaica, while also mining the everyday material textures of Harlem, the neighborhood where he has lived and worked for the past twenty-five years. The conversation explored Ward’s career as presented in this first New York museum survey of his work, which brought together over thirty sculptures, paintings, videos, and large-scale installations.

Nari Ward: We the People