The Spirits Refuse Without a Body 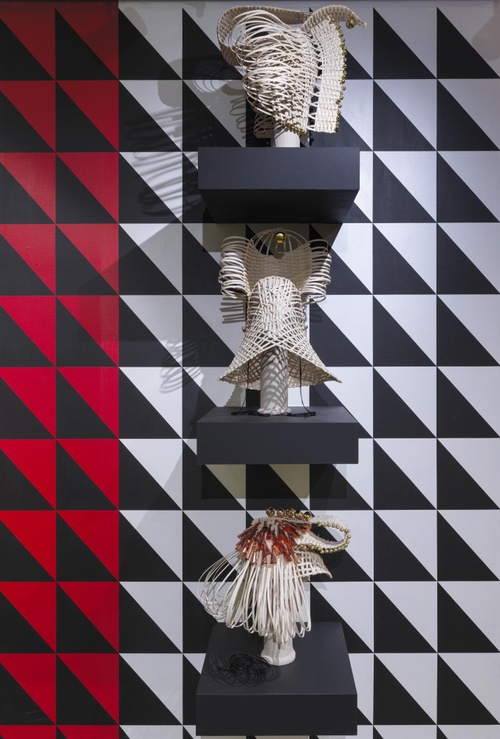 The Spirits Refuse Without a Body

In February 2019, the New Museum presented The Spirits Refuse Without a Body on the occasion of the artist Jeffrey Gibson’s residency and exhibition “Jeffrey Gibson: The Anthropophagic Effect.” Activating the collection of garments Gibson produced for his residency and the exhibition, this intimate event held in the New Museum Sky Room featured a live set by DJ Kookum, as well as performances by musician Laura Ortman and choreographer Mx. Oops, accompanied by Myles Miyake Mugler and Jason A. Rodriguez (Slim 007).

Gibson (b. 1972, Colorado Springs, CO) was the artist-in-residence for the Department of Education and Public Engagement’s Winter/Spring R&D Season: INHERITANCE. His exhibition explored the material histories and futures of several Indigenous handcraft techniques and aesthetics, including Southeastern river cane basket weaving, Algonquian birch bark biting, and porcupine quillwork, as practiced by many tribes across the United States long before European settlers arrived. The title “The Anthropophagic Effect” alludes to Oswald de Andrade’s legendary 1928 Anthropophagic Manifesto, which argued that indigenous communities could “devour” colonizers’ culture as a way of rejecting domination and radically transforming Western culture to their own ends. Gibson notes that Indigenous crafts and designs have “historically been used to signify identity, tell stories, describe place, and mark cultural specificity,” explaining, “I engage materials and techniques as strategies to describe a contemporary narrative that addresses the past in order to place oneself in the present and to begin new potential trajectories for the future.” Employing techniques learned over the course of the residency, Gibson produced a new series of garments that were activated through performances and staged photo shoots in the Fifth Floor Gallery.