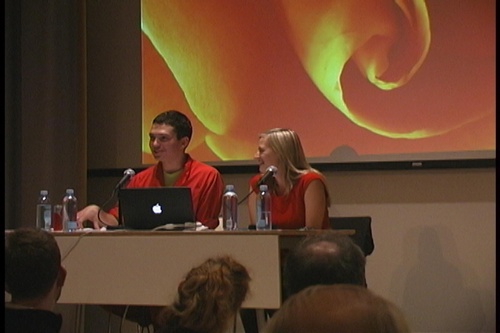 In 2007, the New Museum presented a conversation between the artist Ryan Trecartin and Rhizome Director Lauren Cornell as the inaugural program of the New Silent series. Riotous and multi-layered, Trecartin’s ambitious videos updated moving image practice for the Internet age, with the artist’s fast-growing body of work which explores the impulses and attitudes of a generation whose self-perceptions and relationships are deeply tied to media. Often structured like iChat dialogues, Trecartin’s narratives ricochet between characters and actions, gleaning information and enacting existential dramas at hyper-speed. His characters, all constructed collaboratively with his actors, include independent avatars, people composites, culture collectors, and cyber queers - all twisted and true emblems of what the artists calls “a potential part-cyber today”.

The conversation was the second in a two-part screening and conversation, with Trecartin and Cornell, which featured short videos and excerpts from A Family Finds Entertainment (2004) and I-Be AREA (2007).