And in these particular works, there are there are a lot of references to paintings and images that are sort of connected to my family. For instance, in the painting called grandmother painting the sort of thicker layer in this painting that shows a coastal landscape is derived from a painting that my grandmother made when she was alive. And so my parents moved to Australia from the UK in 1975, a few years before I was born. And so my relationship to my grandmother was only very occasional. I’d write her letters and things but I only saw her in person on a handful of occasions and when I was a one year old she came out to Australia to visit us and she went back to England and made this painting based on her memory of being in Australia and there are really interesting conflations and blurriness in this painting for me.

So she has created a landscape that is a mixture of the coast; she’s labeled it as being St. Kilda which is like a coastal suburb in Melbourne, but she’s also included man ferns and a lyre bird which are flora and fauna that exists in the mountains which are much further inland in like a wet sort of rainforest setting. But for my grandmother these two landscapes have just merged into one thing and there’s no distinction between them and I find that it’s really interesting what memory can do and how your cultural context informs the way that you can inhabit a place and how it persist in your mind.

And within the surface of this image there are three other sort of registers of image that have been called out from underneath that disrupt this strange conflated landscape. And I don’t intend for these different levels of imagery to resolve into a comment or a statement or anything like that. They emerge in relation to one another intuitively at times and they I guess they kind of function to embody contradictions and they ask the viewer to sort of navigate their own path and find their own sets of connections within what’s being presented. 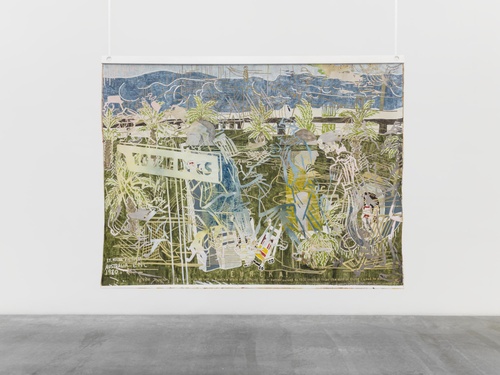