So when I was a kid even through our school was really poor we had a publishing center which was this older woman who set a trailer and you could bring any stories that you’d written to her and she would type them up for you. And then you come back and bind the books and have all these different paper choices and before I left second grade I had published, illustrated, and authored about 12 books. And I was really excited about the prospect of thinking about libraries and reading spaces not as places just to consume information but what role we actually play in constructing and creating information. And so the installation is thinking about opportunities for people to look at existing information to be critical of existing information, but through the publishing classes and through a lot of other opportunities in the space, actually having the choice to be part of the process of knowledge production, not just consumption. So I think libraries are often thought about as place you go to get a thing that already exists. And I think about library spaces as a bit more dynamic, as a place to actually go to look at the things that already exist but also a place where you start to think about your role in constructing information and to hopefully actually be in that role participating and constructing knowledge.

It's really important to think about the histories of black folks in American and how important it is to really consider the ways in which we have not always had access to the tools to create and disseminate our own histories. And how in the 60s and 70s, the ecosystem space is really an homage to the people who were frontrunners in either creating independent publishing presses or were involved in creating these independent black schools or who were involved in creating black book stores. So the roles that they played are really important to me. So all the printed matter in the space are either articles from Ebony magazine, which was a black produced, owned magazine company. Either from them are articles about independent black schools. You have textbooks from independent black schools. You have chapbooks and pamphlets from independently owned and operated black presses in Detroit. You have magazines, you have children’s books, you have all these things that have been created by black folks who were invested not only in consuming information about themselves but being in charge of narrating that. So the library is an opportunity for people to explore this printed matter. To think about again what role they play in creating printed matter in this contemporary context and to really think about what does it mean when people don’t actually wait for someone else to tell their stories but actually take everything on their own and say we’re going to tell this story for ourselves because we recognize the nuance and the complexities of our history and we know that everyone else has been doing a really poor job at it. So that really is an invitation to think about those histories through an installation through this library, through this photocopy machine, through all the different features in the space, are really an invitation to think about, think deeply about knowledge consumption and knowledge dissemination within black communities. 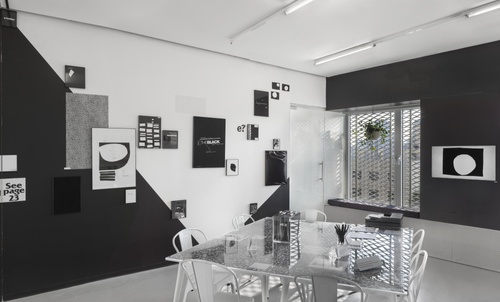