This Video Life in his Mouth, Death Cradles her Arm was first created when I was still in undergrad. And I wanted to do a performance to reflect the passing of my brother and that situation of children during the civil war and the high mortality rate and these kind of things. So I thought of this maybe child’s blanket that could weep. So then the way that I could make this image happen was wrapping ice in this baby blanket which I originally performed in a group kind of show. But then at the same time I think the piece needed more space.

In any case in 2013 the place where I had my archives burned down so then I took an opportunity from a commission from two years ago to recreate the piece and to contextualize it within Guatemala in the General Cemetery. Its avenues they call it where bodies are one on top of another in niches, appearing a little bit like housing complex situation. Even though these avenues I think they began to be used in the 19th century. And sort of it’s a place where working class people or people with very little means are able to bury their dead. And I think also there’s a clause for rent so then sometimes I think the niches are emptied and other people put in if fees are not paid. So there’s a little bit of non-permanence to this graves and changing of bodies. 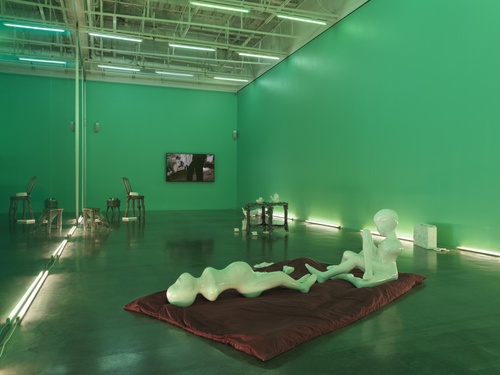