On June 20, 2018, the New Museum hosted a conversation between John Akomfrah and Gary Carrion-Murayari, Kraus Family Curator, on the occasion of “John Akomfrah: Signs of Empire,” the first American survey exhibition of the work of the legendary British artist, film director, and writer.

Since the early 1980s, Akomfrah’s moving image works have offered some of the most rigorous and expansive reflections on the culture of the black diaspora, both in the UK and around the world. Akomfrah’s work initially came to prominence in the early 1980s as part of Black Audio Film Collective, a group of seven artists founded in 1982 in response to the 1981 Brixton riots. The collective produced a number of films notable for their mix of archival and found footage, interviews and realist depictions of contemporary England, and layered sound collages. In works like Handsworth Songs (1986), Akomfrah and Black Audio outlined the political and economic forces leading to social unrest throughout England. Akomfrah and Black Audio’s works were remarkable for their trenchant political inquiries and consistently experimental approach. Throughout the 1990s, Akomfrah’s subject matter expanded beyond the social fractures of contemporary British society to focus on a wider historical context, from the persistent legacy of colonialism to the roots of the contemporary in classical literature. Moving into the early 2000s, Akomfrah also produced a series of atmospheric works addressing personal and historical memory. In the past several years, his multichannel video works have evolved into ambitious, large-scale installations shown in museums around the world.

This conversation followed a conversation with Thomas Bayrle and Massimiliano Gioni, Edlis Neeson Artistic Director, on the occasion of “Thomas Bayrle: Playtime,” the first major New York museum survey of the German artist. 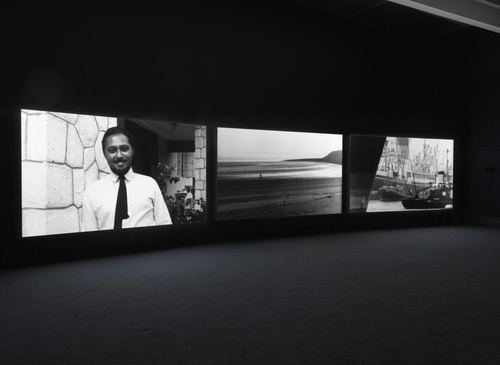